As some of you may know I took off to Newark, Ohio for a meeting this past weekend. What kind of meeting? Can’t say much other than it has to do with an upcoming decision that will be announced shortly.

Newark is about a 140 miles from where I live so no way was I going just for a meeting. And let me tell you, it was a very pleasant escape. Ruth came along and kept remarking how beautiful everything was and how wide the land is. We saw so much it was fabulous.

Our meeting was hold at the Cherry Valley Lodge just outside of Newark. During our lunch break I headed to Granville. We had a decent breakfast at the Aladdin restaurant that has been there for years. The place looked it. Driving through we saw a church with a crowd of people out front. Some were dressed in period clothes of the 1800’s. We took a walk and found out they were having a reenactment of the abolitionist movement. The man playing the part of Fredrick Douglas looked eerily like him. 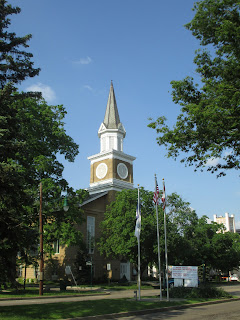 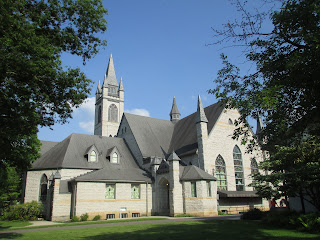 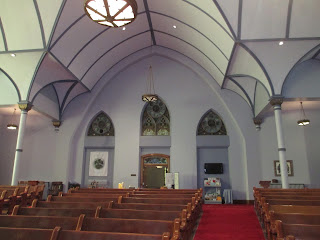 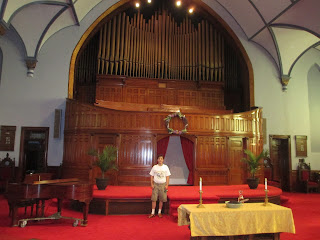 After the meeting we headed right back to Granville to finish our walking tour. The village is beautiful with many historic houses and churches. It is home to Denison College. I took numerous photos of the many churches. The one that really caught my attention was the United Church of Granville. Outside of the church was a man just sitting. I approached him and we had a nice conversation. His name was Ron and the janitor of the church. He said come on I’ll let you look inside. I would sum it up this way, gorgeous and wow. Thanks Ron.

It was time for supper so we bought groceries and headed to Infirmary Mound Park. Supposedly the park at one time was an old age home where the elderly were put and made to work on the farm. HUH? That’s what someone told us. 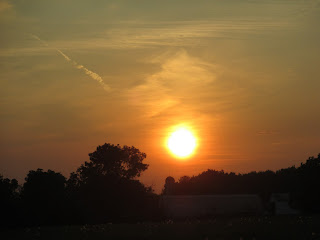 When supper was done I cruised through Newark looking for a cruise in to park the GoGo Bus, no luck. Then I drove around in circles looking for a donut shop. Are donut shops along with bakeries almost a thing of the past also? Have the big corporate chains even killed this? I did stop at a gas mart and a convenience store to satisfy my craving but at a buck a donut and one that wasn’t fresh just NO WAY! I ended up at Krogers and bought cereal.

I parked the Bus back at the Cherry Valley Lodge and slept in their lot over night. Our wake time was 10:45 and it was off to church. I wanted to go to the United Church of Granville the one Ron showed us around but when I read their brochure it scared me. It read more like a pamphlet for a social political party and one that was FAR LEFT leaning. It says they embrace the LGBT community. Their website even says historic church, progressive people. And my website says no way.

We still hurried up to Granville to find a more suitable church. I parked on the main street and I almost caused a traffic jam. Two cars stopped to look at the Bus right in the middle of the street. One lady even got out of her car to talk to me. Gwyneth was her name. She attends 3 churches, a Baptist, a Quaker and the First Presbyterian, all in the little village. She said the First Presbyterian Church is still holding service to go there. This was the church that held the reenactment of the slavery debate. It is a HUGE church not as ornate but still very historical looking. The observation I made was this…. These churches are very traditional looking, still use and organ, hymnbooks, a choir but they are progressive with one for homosexual rights and this one with two woman pastors.

I was invited to say for coffee and ice cream, which I did. Friendly people. We then took off following the same route we took to get here. It was night and wanted to see in the day what we missed.

Our first stop out side of Newark was a vintage car dealer, Phil Stalling Classic Cars. It looked like a used car dealer from years gone by. His lot and store is filled with vintage iron. Incredible. 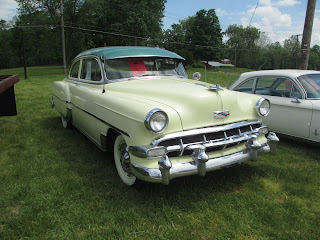 Still on the same route we stopped at the Ye Olde Mill – Velvet Ice Cream. The mill is where Velvet Ice Cream is made. They have a pond, nice pavilions to hold picnics, some trails, and of course the ice cream shop and gift store. They even show you how they make ice cream.  Wonderful. 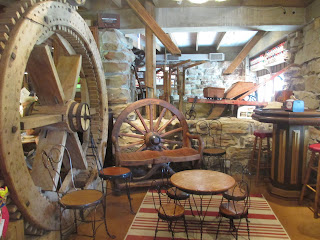 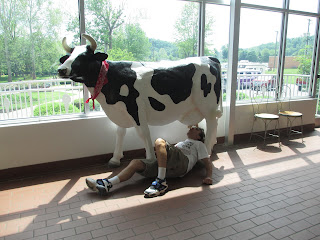 From there we entered the town of Utica. It still has a Ben Franklin. 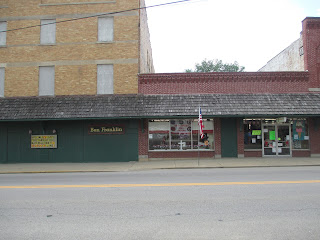 Of course I had to stop for memories sake. Nice older store with small town charm. Almost right next door is the Watts Restaurant that has been there for over a hundred years still with the original family. I loved the homey decor. And women down here still wear dresses. Even a few of the waitresses did. Though I do wish the owner wouldn't of talked so loudly about his surgery, it was gross listening to it while we ate. 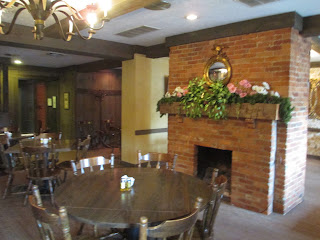 I recommend the fried chicken, as their menu says fresh chicken slowly simmered, then battered with my grandmother's recipe and deep fried golden brown. Also try their homemade egg noodles made fresh each morning.

Our last two stops were at little Shreve Lake and from there it was onward home stopping briefly in Seville to show Ruth the grave marker of the Bates who were the GIANTS of Seville.

Hey Gang,
YES Malinda and I will be holding a Memorial Day picnic.  Place will probably be in the metro parks.  Stay tuned.

Today I went shopping at Save A Lot.  It should be called Save A Little as even groceries in this store are starting to get expensive.  At one time the store in Euclid had a nice meat department.  Over time it has gotten smaller because of the cost of meats.  4 burger patties now a buck a piece at a cheap discount store.

But that's not what I wanted to write about.  I was checking out and the male cashier maybe early 20's mumbled something.  I thought he asked the price of the ears of corn I had.  So I told him 3 for a dollar.  He looked puzzled and then said in a manner a little more understandable what are dese?  Corn.  He still looked lost so he asked another cashier.  The other cashier said just type in 512 it should come up.  Is this what it has come to in America?  A person doesn't even know what corn looks like?

Friends who live close by and who are planning on planting a garden.  In about 10 days I will be going back to a farm right here in Kirkland.  I never noticed it before.  Gee its only been there for 55 years.  I was at other nursery's looking for vegetables to plant.  Most of the places look like their stock comes from some corporate farm and the prices reflect it, expensive.  Some tomato plants are now at $3.50 each.   Well when I stumbled upon this place I lit up and felt so good.  The man had an accent that reminded me of years ago.  Rural and almost sounding southern.  Its getting harder and harder to find the old time farmer up north.  This farm has quite a variety priced right.  I bought 9 tomato plants, 3 pepper plants and one flower for $8.50.

He asked if I liked hot peppers.  I replied yes that's why I got the hot banana peppers.  He replied them ain't hot.  He gave me a paper that listed his hot peppers.  The paper is titled Welcome to NE Ohio's Hottest Garden.  There are almost 200 kinds.  Names like Moruga Red, Scotch Bonnet, Scorpion Trinidad.

Anyone want to join me in about 10 days?  Heading back there to get the rest of my garden.

Hey Gang a few photos of last weekends outing to Holden Arboretum. Its an excellent place to bird watch and learn about many different plants and trees.  Trails are fairly easy.  Bring a lunch like we did and enjoy a leisurely day. 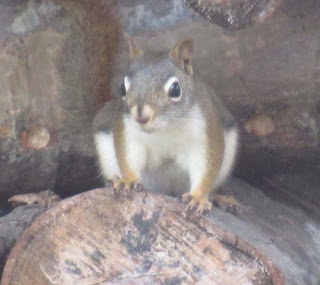 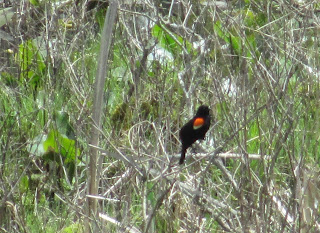 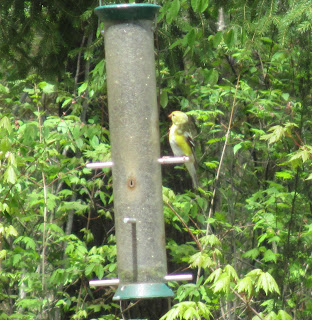 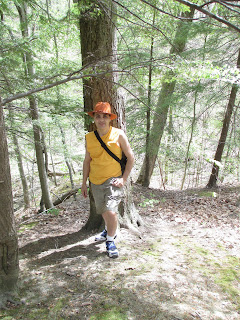 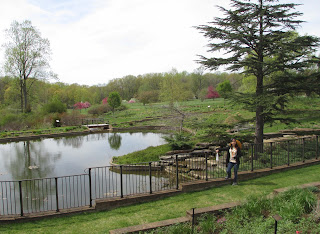 the GoGo Bus loves a parade

Hey Gang,
Just informed that the GoGo Bus took third place in the Maple Festival Parade.  Third time entering the parade and I took third.  How 'bout that. 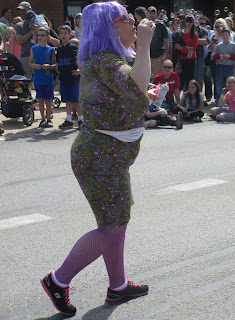 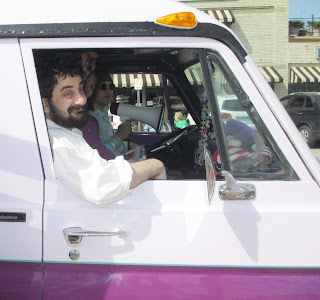 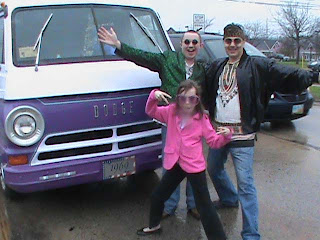 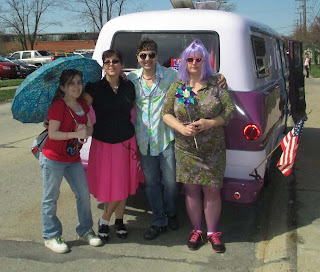 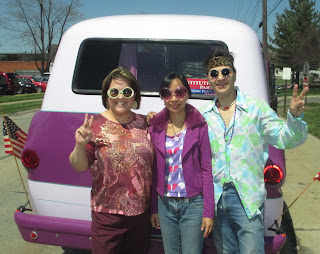 Saturday was just PERFECTO WEATHER and we had a little bit of a reunion as Sabra, Margaret and Sharon showed up as the GoGo Girls passing out candy, shooting silly string and blowing bubbles. Sunday well now that was a different story as it was cool with rain.  But all in all both days were great fun.

I love a parade... even if the weather did rain on my parade.