What a fun day on Friday. My sister Cindi and John invited Ruth and I to a country store near Albion, Pa.. Even though I had more than enough on my plate of things to do I jumped at the chance to go on a day trip. I suggested that maybe we could go eat at the Girard Dinor afterwards. Besides those loose plans nothing else was planned, just the way I like it.


We headed out about noon to Jacob & Delila - Schwartz's Country Store, in Springsboro. Schwartz's is not that big of a store but boy is it packed just like a country store should be. They have things I haven't seen in years like made in America goods and other toys and doodads that I thought were long gone. I definitely would go back.


From Schwartz's I used my inner compass and got us heading north towards Girard before Cindi used her GPS. Her route had us going into Albion then Girard. Albion is a neat little town. If you are driving east into Albion on 6N, I know doesn't make sense – N usually means north, you will see a consignment/antique/thrift shop. John had no choice but to stop otherwise we may of jumped out while the car was moving, yeah we do get that excited. The name of the store is One-Eighty Consignment & Thrift Shoppe.

I've been carrying my books Hey Gang! Ready to Go-Go? and promoting it every chance I get. You never know what store may want to carry it. I asked the gentleman at the desk if he was the owner, he was so I said this is my book, take a look at it while I shop.

We finished our shopping so approached Pierino the owner and asked his thoughts on the book. We had a nice conversation. He was honest and said I have found people won't pay retail in a store like this, but I love traveling and your book looks interesting so I'll buy a copy.

From One-Eighty Consignment we headed north on 18 when we spotted a garage sale. We stopped, c'mon you had to know that was coming. Everything was just about gone but I did find one antique miniature bottle for a dime. Before leaving I told the man I wrote a book based on my travels let me show it to you. Before even getting it he said I'll buy one, I love traveling. His name was Robert. He told me a few stories of his family travels with his wife of many years and that he restores cars. In his barn is a model A. We made tentative plans for me to stop back someday.

Finally we made it to Girard but not before stopping at one more second hand store and again you knew that was coming. Finally it was off to the Girard Dinor. It was good to see the little restaurant still in business and almost as I remember it. They no longer stay open 24 hours and the counter area is seldom used as business is not what it once was but the food is as good as it always was. They are known for their chicken and the Dinosaur Burger, that's what I got. It comes with or without potato's. It's so filling I couldn't finish my potato's. 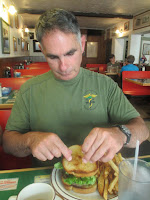 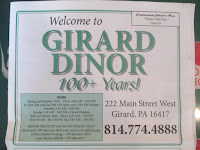 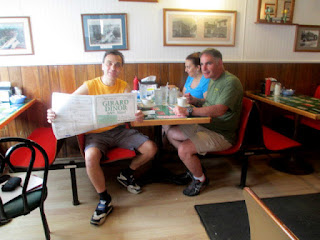 Across the street from the Girard Dinor is the Fudge Caboose. We stopped in for an ice cream. Well they did, sometimes I don't do well with ice cream. The owner kept tempting to buy one and I almost succumbed until I turned around and spotted their chocolate counter. I settled on their small peanut butter cups. Delicious! They have gourmet ice cream in flavors like Blueberry Cheesecake, fudge in flavors like Orange Chocolate, Heath Bar fudge, Butterfinger Fudge, Mint Chocolate Swirl, gummy bears, chocolate and other good eats. The owners names are Guelda and George.

I showed Guelda my book and before I said anything she said why don't you leave it on the counter and try to sell it. I said OK how about if I bring in a few more copies. I gave her some promo's for the book and she immediately put up a nice display for me. 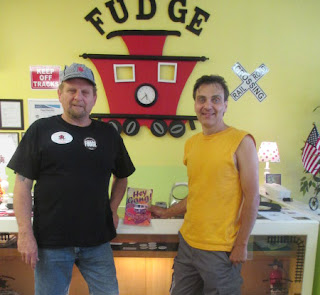 So besides having a friend, um make that friends in Pennsylvania my books have found a new home.

These are the links to the places I mentioned if you care to take a road trip and enjoy them as I have or if in the area and want my book stop by the Fudge Caboose.


Hats off to owner George who has completed the course for the Fudge Caboose and is now a certified FOOD SAFETY MANAGER for the state of Pennsylvania – Way to go George!


PS: check back to this posting as I will post some additional info on Jacob & Delila - Schwartz's Country Store
PSS Thanks John & Cindi for the fun day trip!
Gotta Go-Go!
Carey