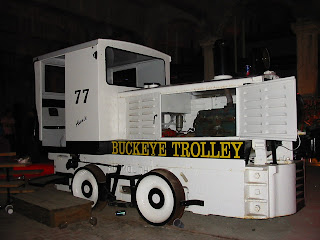 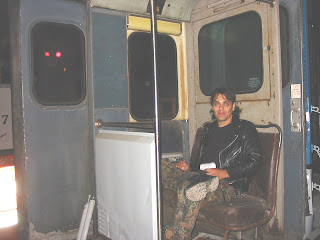 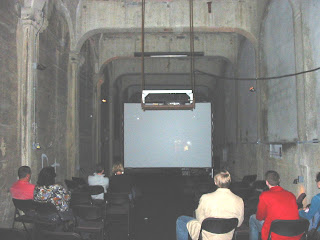 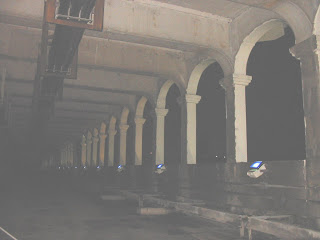 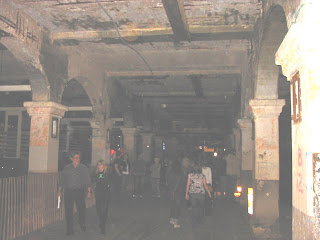 Hey Gang,
A quick postingl with some photos from a few weekends ago of the Bridge Project. I want to thank Sharon for posting this event on the GoGo Board. This is an event everyone should see at least once.
The Bridge Project is held on the lower level of the Detroit/Superior bridge in downtown Cleveland. This is where the old trolley cars use to run. I was so completely amazed at how much space is below ground. I never knew that Cleveland at one time had a subway, at least parts of it were underground.
Dad remembers it vaguely as a kid. My grandfather never had a car and they would take the trolley to the zoo and to get around Cleveland. Dad said it would be scary going over the bridge as they would sit near the back and were able to look down through the grating at the river way below.
What I completely don't understand is the lameness of Cleveland. They are trying to come up with all kinds of ways for mass transit and the push today is for electric vehicles, well why don't they just refurbish the old street car lines? I just don't get it, the structure is already in place.
You really need to experience this event. Its very hard to describe. Just walking around looking at the massiveness and details of the pillars and work is something to behold. The condition and the eeriness reminded me of the Mansfield Reformatory. The craftsmanship of years ago is such a lost art, never again to be duplicated.
Something else got my attention that to me strikes down the theory of the earth being millions of years old. Hanging from the roof of the lower level were stalactites. They were about 15 inches or so long. Now if they could grow that long in a relatively short period of time, think of how fast they could grow underground with the right conditions.
As for the art, entertainment and oddball displays it was completely eclectic. There were a couple of stages set up for bands, one band was conventional, the other was pots and pans. There was a small stage set up for plays. A few sitting rooms that you can't quite explain the inspiration for their design. A Dj playing rave music. Beer, hot dog and food stands. Weird old movies playing from projectors being shown on the walls. Just very odd and so amusing the different styles of entertainment. One person had a neat novel idea. He set up a microphone and video camera and if you told a joke he would give you a nickel. It was to promote his website service. Here is the link: http://www.sillyservices.com/.
See if you can find me telling two of my Carey originals. If you can't spot me I will tell
the number.
The atmosphere was almost Goth in feel because of the lighting and condition, sort of like those futuristic movies where everything is destroyed and people are making the most what they have. Just a very fun and entertaining evening that broke the monotony of the norm.
Why Cleveland didn't promote this more is beyond me. Make plans for next year and attend it, you won't be disappointed.