Aww yes, if video camera's in pencil sharpeners in city hall, arresting people for having a family member stay in their vacant house, street light fee's, 1,000 empty houses, scandals with housing inspectors, a woman killing a doe with a shovel weren't enough Euclid now has UFO's hovering off shore. What next a plague of frogs??

Mayor Cervenik has been exonerated. He said I told you people weren't leaving because of our bad and inept laws, the empty houses are caused by alien abductions.

Euclid council is busy trying to figure out what to do if the UFO lands. They're debating if they should call the military or just send out their housing inspectors.

Euclid's new ordinance. All alien space crafts that land in the city of Euclid may be no greater than 30 foot in circumference, have no more than 15 revolving lights, must have proof of insurance, can not park on any side street, may not carry any lazar guns within 500 yards of a school zone, must apply for an over night visa, must............... 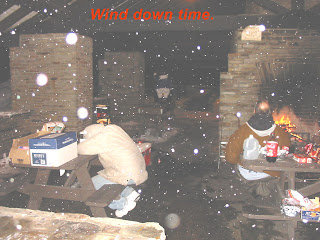 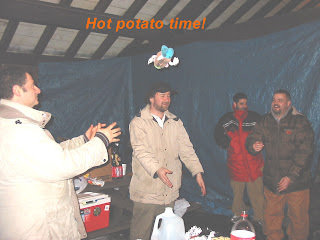 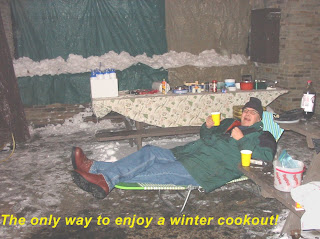 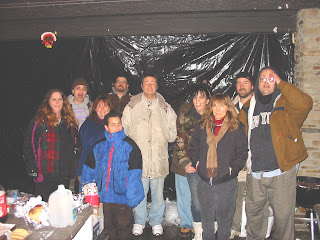 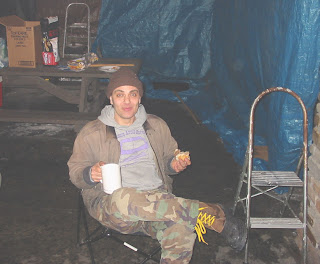 Hey Gang,
Another chillingly fun time! I think one of the best Winter Cookout/Freeze Fest to date. The snowiest for sure. Temps were perfect about 32 and very little wind but oh the snow kept on coming and coming and coming and yet about 14 showed.
Some rookies in attendance, Cindy R., Bob R., John, my sister Carol, with some old friends and of course Jeff B. who has made all of them. Next year I think if he makes it I will give him the Frozen Hand Award.
Bob was one of the first to arrive. He wasn't sure what to make of the set up and wondered what he got himself into when he saw the tombstone RIP. I just didn't have time to make signs so used Halloween decorations instead. Hey it served the purpose.
No matter how hard I try to organize things the event always comes out as unorganized chaos. But maybe thats what makes it such a great time. Before everyone arrived I had a temporary moment of panic when the wood that was promised was used up by someone else. All that was in the shelter was a small pile and in the fireplace smoldering ashes. So I went to the Ranger station. All the park hands were out busy plowing to keep the roads open so I said heck just show me where the wood pile is and I will get my own. Boy did I load up my van with wood.
I do have to thank Rich for all the help setting up and breaking my record player. Whats a broken record player amongst friends though? But I don't want to sound like a broken record so won't mention it again. And YES I still tote around a record player. I had spinning the Rip Cords with such memorable tunes such as Surfin Craze and Beach Girl, after that Hawaian Paradise. I just wanted to make everyone feel cozy.
I had give aways, books, videos, flag magnets for the car and what ever else on the table, coffee cups etc.....
I had two rounds of hot potato played with neat prizes. Jeff winning the first and Isaac the second game. I want to thank Cindy for leaving her tasty apple cake behind. No one spied it and I am glad. I took the container of it home and enjoyed all of it by myself. Cindy I want that recipe!
The best time though is when things wind down and we sit by the fire and chill or should I say warm. I keep telling people to hang out longer to enjoy it. Keith, Jeff, Mark and I hung around until almost 1 am spinning tunes, drinking coffee and talking. Not one ranger came by to boot us out. Glad this wasn't in Euclid.
Just a great time - can't wait for next years!
Gotta GoGo!
Carey
Posted by Carey K. Masci at 11:22 PM No comments: