Here it is what everyone requested, the radio show I was on. OK so it was maybe only one that asked... but serious though that one person wasn't my mom.

Hey Gang, The Friday Show with Dave Lynch & co-host Chris Lambert that I was the guest promoting my book “Hey Gang! Ready to Go-Go?” is now archived on WELW which has been changed recently to WLYN 1330 AM. 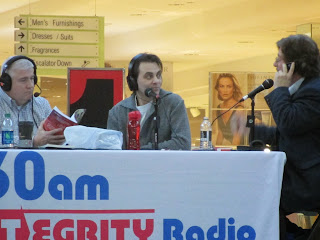 I am a harsh critic of myself and don't feel I did that good. In the beginning I was too amp-ed up, um not mic wise but emotion wise. I was a wee bit anxious and a little surprised with the arrangement. I had no clue I would be on stage in the mall broadcasting live. I've been on the radio before talking politics but this was different. This was about my book and I was the focus.

Timing also was a bit off a few times because we only briefly rehearsed before going on air about hand signs and what to expect. On one question I cut my answer short when Brian, the person manning the controls, gave a five finger sign. I thought he meant 5 seconds so I hurriedly gave my answer and quit talking. I found out later that meant five minutes not seconds.

Oh well. I want to thank Dave Lynch and Chris Lambert again for this opportunity. I know Dave Lynch as a politician and lawyer. On the radio I got to see another side of him and he is genuinely very witty, a fun guy. Chris Lambert is equally as witty and a class act. I was sitting next to two pro's that have great chemistry and on the radio it really comes out. In all I had a hoot of a time, I hope to be able to join them again. 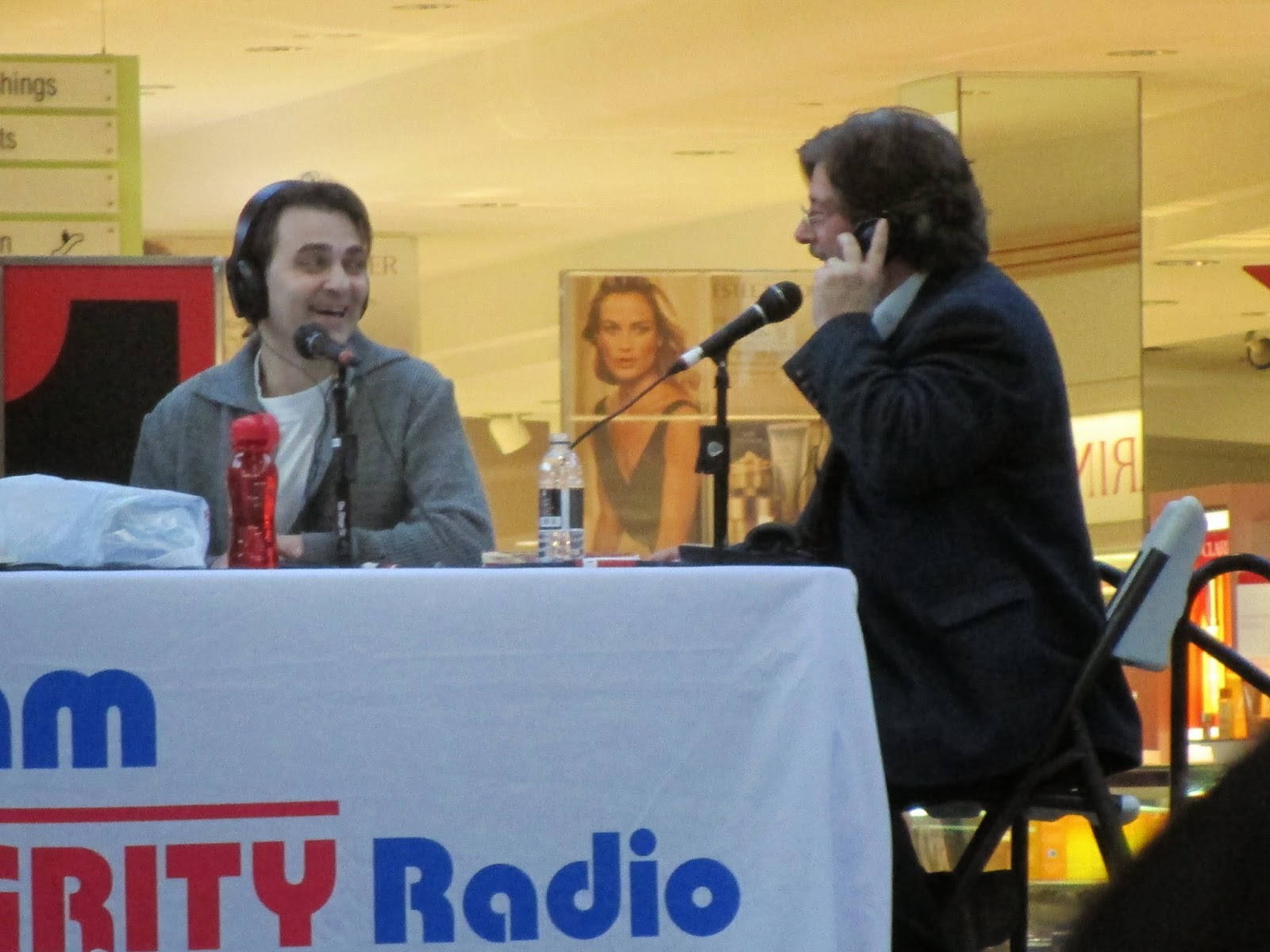 Enjoy.
Gotta GoGo!!
Carey
Posted by Carey K. Masci at 3:21 AM No comments:

Hey Gang,
If you remember a friend of mine Kurt saved a woman's life back in November. If you don't just search my blog.


Well today my sister Cindi was at the Sweet Berry Market in Wickliffe. Just as she was about to pull out she saw a man run over his wife.

Cindi immediately jumped out and yelled at a woman on a cell phone CALL 911! My sister took charge of the situation told the husband don't move the car and knelt and held the woman. She talked to the woman the whole time.

Cindi said it was one of the most horrible things she has seen. The woman looked like a rag doll, her leg was under the tire and her arm was twisted backwards under her body.

As with Kurt and this situation today, it may have been an accident but it was no accident that both Kurt and my sister were present.

UPDATE: I was just informed by my sister the woman has died. When My sister told me that the woman was bleeding from the mouth I knew it was not good, that usually means internal bleeding. Let's hope she knew Christ. I will say this.. thank God my sister was there with the woman in her final moments.
Posted by Carey K. Masci at 5:33 AM 1 comment:

Hey Gang, Here we are already three weeks into 2015. Since there has been a lull in the action with work and the cold has settled in I thought I would now take a look back at the year 2014.

Overall 2014 was a decent year, financially and as well as personally things were stable. Not a lot of lows, more of an even keel year. Some goals were met, some traveling was done, and business was steady.

If you remember most off the winter last year was a deep freeze. It got called in October and lasted almost all winter. The below normal temps went right into the summer and because of that it altered some of my plans but it was still a full year of activities.

Here is a list of events that happened in my life in 2014.

January Early in the month Uncle Joe and I had a fun time at Jeff Bedoll's house tuning Mom Bedoll's piano followed by a trip to a Chinese restaurant. Even though it may seem like no big deal it was for a few reasons. 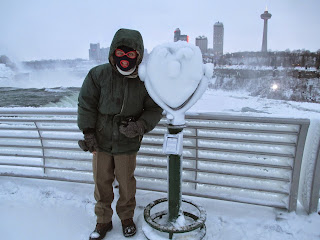 Near the end of January during the deep freeze and a major snow storm, Ruth, Janet and I ventured to Niagara Falls to find out if it freezes. It didn't but that was one exciting memorable ride there and back. What made that trip a bit strange was passing our friend Joe from Euclid way out on the NY interstate. What is the chance of that happening?

February The Winter Cookout/Freeze Fest was back in session. Every year I say this could be the last one and every year its back on. As usual about 15 or so showed.

March I went to Dayton with Walt & Jimmy for a dance recital. After the recital we visited the Wright Patterson Air force museum, walked the Clifton Gorge, ate at the Clifton Mill and got on stage at the Clifton Opera House with Ma Crow and Lady Slippers. Let’s not forget meeting the manager of opera house Brian Ehler. 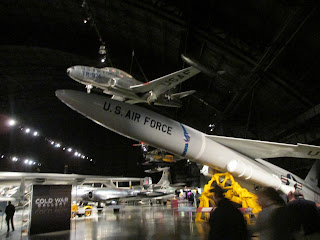 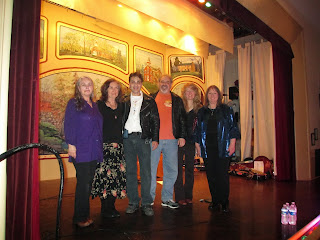 Mid-March I witnessed a car fire on the marginal. In a sad way that was exciting. 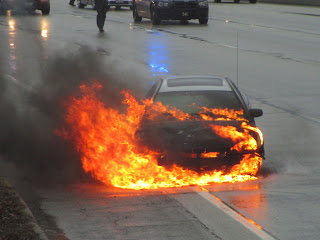 I went on another trip with Jimmy and Walt to Columbus to see the high school hockey playoffs. Mentor lost but it was still a fun time. 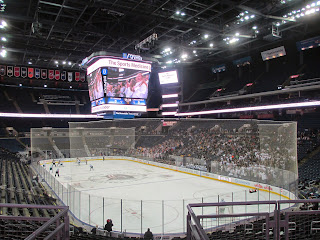 April Journeyed with Ruth, Paul and Dan to Memphis to attend the Constitution Party National Convention. What a great trip. Besides the convention we saw the Lorain Motel where MLK got shot, 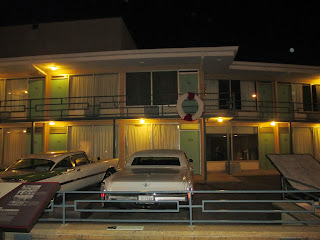 Graceland then drove through Nashville into Kentucky and the Mammoth Cave region where we toured a cavern.

May Another outing with Walt & Jimmy to the Youngstown Airshow not nearly as big as Cleveland's but still well worth the drive to see it. 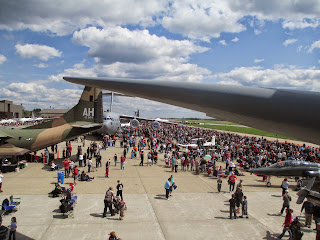 A day trip with Ruth to Newton Falls The Mt. Carmel festival in Wickliffe with Joe.

This wasn't an event but did everyone forget already the heavy rains and flooding around the Cleveland area in mid-June? 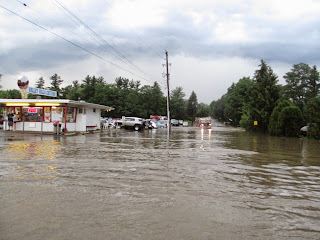 A day trip with Ruth to Garrettsville for their Summerfest which is billed as the largest summer celebration in Portage County. While there I parked the GoGo Bus at their car show. 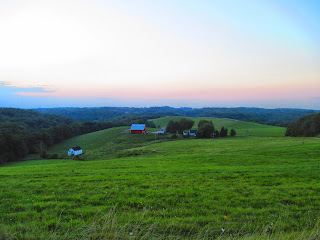 Another day trip to Rock Creek with Ruth. 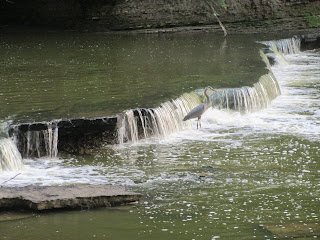 The Kirtland Strawberry Festival with Ruth and Paul. I remember what a chilly night that was.


July The 4th we had a gathering at my house. After the backyard party some of us went to Colby to view the fireworks. And yes it was unseasonably cold, cold enough for jackets. 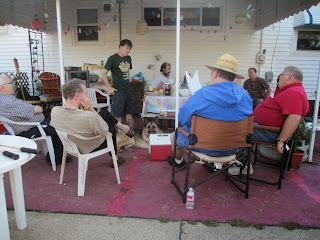 Geneva Lake with Ruth and Paul.

Janet invited Ruth, my sister Cindi, and I to Blossom Music Center to hear the Cleveland Orchestra. 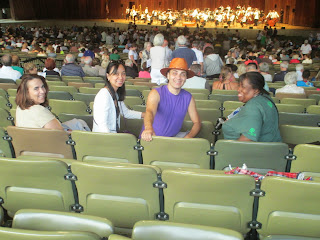 There was Walt's 50th birthday party held 3 months late. And during the party a major summer storm blew through triggering tornado sirens all over the place adding even more exciting fun to the festivity. I remember calling the parents and telling Mom help Dad into the basement, tornado sirens are going off it got that scary.

A very fun day trip that started off disastrous to Brecksville Reservation with Ruth, my sister, Jamie and his girl Stephanie, Michael, Jeff and Paul.


August Another day trip with Ruth to Brandywine Falls during a cool wet day. 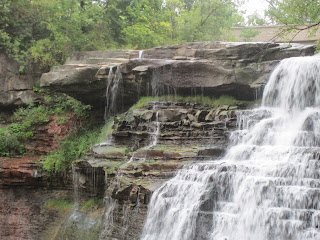 And yet another day trip to the little town of Scio for their Fall Festival with Ruth. 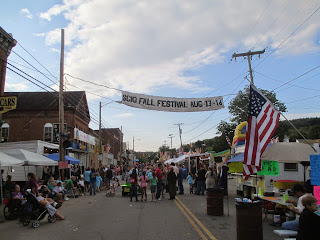 A fantastic three day trip to Cloudersport, Pa with Ruth and Paul. We saw so much on this trip and met the most friendly interesting people. So many moments to look back at on this trip.

A frustrating day drive to Atwood Lake. I drive all the way there and find out you have to pay an entrance fee to enter the park and use the beach, needless to say I didn't and left in a huff.

I believe it was August that Dov and I went to Mohican for a day trip and stopped in Ashland to meet Andrea my first editor of my book Hey Gang - Ready to Go-Go?, or was in June?

A hike in Kirtland with Ruth and my neighbor Michael.

A meeting in Columbus for the Constitution Party.

For Memorial Day weekend I had a small party at my house. I also manned a booth for the Freedom Alliance at the Geauga Fair then went back to the fair with Rich on Memorial Day.

September Cleveland World Festival, this was a terrific event. A little too New Age-ish for me but the numerous stages set up showcasing different nations and ethnic groups with the many different variety of foods stands was great. The highlight was the jam session at the end and I met my second grade teacher who actually remembered me.

Jordan Carlson wedding and held a meeting at the Greek House in Wickliffe for US Congress candidate Dave Macko.

October Joe and I celebrated our one year anniversary at the Painesville Antique& amp; Craft Co-op.

I've wanted to host a B movie night in the park for some time. I found on Craigslist a free 60 inch TV. Not many attended unfortunately but I enjoyed it.

The third meeting of the year for the Constitution Party in Columbus, this was a state convention.

Finally after years of talk and months of telling friends my book “Hey Gang Ready to Go-Go? was released and to celebrate I had a book signing party at my house. Thanks again to everyone who attended and showed support.

Another B movie night/Halloween party in the park. More friends showed this time and the camaraderie was much better than the movies. Unfortunately we spent more time laughing and talking then actually watching the bad horror flicks. 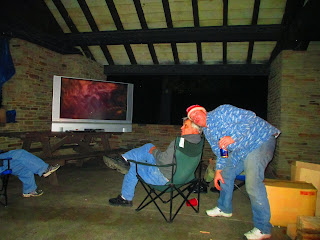 November  Onward to Cincinnati for the Constitution Party National Convention. A great time meeting with fellow Constitutionalist's. We also took a ride on a steam boat during a cold snap that saw temps way way below normal. And I found out the Cincinnati airport is in Kentucky?

I set up at the Painesville Co Op for my first public book signing. It went quite well.

December  Ruth, Melinda, Mike and I met Janet in Zoar for their Christmas Festival which was unique as it didn't have a lot to do with Santa but it gave you a glimpse into the past lives of the Zoarites and their homes. 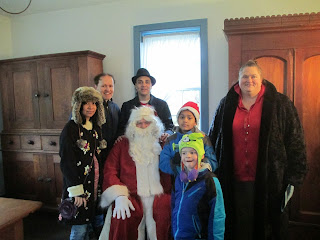 Second week of December Adrienne her husband and Mom accompanied Mike and I to the Christmas Story House. I flagged down a cop that gave Adrienne and her Mom a ride in the backseat to the house

A day trip to Middlefield with Mike. He took me to a few stores I was not aware of.

My annual Christmas Party was held at my sister Cindi' and it was the biggest yet. A fun time exchanging the cheesy, not as in cheese cheesy but bad cheesy gifts.

Christmas was spent at my sister Candi's

And the New Year was brought in quietly at Candi's.

There are probably other things I forgot about but I am sure when some of you read this you will say HEY what about....... OH YES what about.....
Wonder what this year will bring? I know one thing I am ready to Go-Go!! 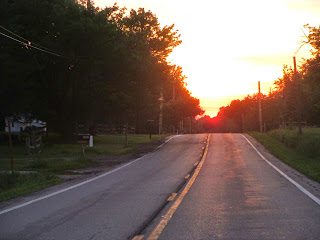