thee only debate that matters


On September 19, The Free & Equal Elections Foundation announced that Gary Johnson, Jill Stein, and Virgil Goode have each agreed to participate in a presidential debate on October 23, Tuesday, at 8 pm central time. (9:00 PM Eastern Time. Reform Party candidate, Rocky Anderson, has agreed to participate since then. Free & Equal is sponsoring the debate. The Republican and Democratic nominees are also invited but it is very likely they will not attend. …

Free & Equal invited every candidate who was either on the ballot in states containing a majority of the electoral vote, or who have registered at 1% in a national opinion poll.

The event will be at the University Club of Chicago. Larry King will be the moderator. You can watch it on CSPAN 2 and other media or with other Libertarians and patriots beginning at 8:00 PM at StringZ and WingZ 1543 Route 303, Streetsboro.

Hawk
It was so scary today what happened. I was in my backyard talking with my neighbor Fred. We heard this weird noise it almost sounded like a propeller. We turned around just in time to see a HUGE hawk chase a pigeon straight into Fred's house. The noise the pigeon made was an ugly loud THUD. Feathers flew all over and the pigeon dropped into the drive dead.


Fred went to look at it. I told him get away because the hawk was making such a noisy fuss from a large tree in the back of his yard. I thought for sure it would swoop down and attack him for his food.

Fred walked away and I hid so I could watch what the hawk would do. It came down, landed on the fence, looked in all directions, swooped down and took the pigeon away.

A strange sighting to see a hawk in the suburbs. We never had them before.

There was no way to keep up watering everything. I had to protect the garden and a few plants but the rest like the roses, bushes, grasses and trees were left alone to face the heat.

Mid summer I saw all this water drip from the air conditioner. I thought hey why not collect this to water the plants so I put a bucket under it. Then I thought about the water from the sink. So I put a large pail in the sink and every time I rinsed a dish, ran the water to drink, brushed my teeth and any other reason I collected the water. I was amazed how much water I wasted in a day. I was running outside at least 4 times a day emptying the 3 gallon bucket.

Then I started saving any left over coffee, flat pop, spaghetti water, any kind of water. Let me tell you, it helped save some of my plants. Should of done this from the start of the season my grass might of been saved also.
~~~~~~~~~~~~~~~~~~.

What are we eating???

Since I went to the Philippines I became even more aware of the stores in America that serve nothing but chemicals disguised as food. And restaurants may be the worse culprit of this practice.

I went to Denny's with a few friends during a lunch break, umm snack break at about 3 am. I ordered the omelet. When it was first served hot it tasted so good. But as I got to eating it and talking to much it cooled down and noticed my stomach was not feeling the best. I was in a hurry anyways so quit eating and had the omelet, the rest of my hash browns and toast put in a to go container.

I got home about 6 am. Before walking in the house I said to myself I ain't going to eat this so I emptied the container on my porch for the birds to eat it.

I woke about about 1 pm to a blistering hot day. I went to the porch and all the potatoes were gone, so was the toast but there sat the cheese omelet still in its original shape. The cheese didn't melt but what was stranger than that was not a bite was taken out of it by the birds, chipmunks or squirrels. And even more strange, not one ant was around it. I picked it up and it didn't bend or drip. It did leave a big stain on the porch though. 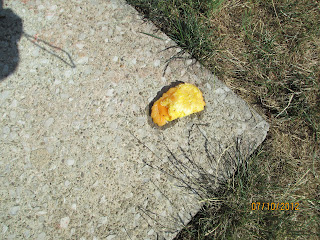 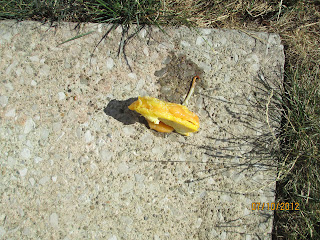 What was that omelet made of? Plastic??
Posted by Carey K. Masci at 1:15 AM No comments: