Recently I took Mom and my sister Cindi on a road trip. The trip I planned was one I took a few years back, Rt. 90 east get off at Peach St. in Erie, head north, go till that just about dead ends, then take Rt. 5 east to Dunkirk NY., though on this trip I was adding a stop in Salamanca, NY to visit a cousin then loop back home.


Rt. 5 once outside of Erie is a beautiful route to take a leisurely drive. It hugs close to Lake Erie, passes through farms and vineyards and beautiful older homes. The sad part is starting in Erie all the way to Dunkirk then Salamanca there were so many places out of business and run down.
The day began with a nice surprise which was a perfect start to an outing that turned into a trip down memory lane. My sister had Dads photo hung up in Wickliffe. Wickliffe honors its veterans by hanging banners on light poles on Euclid Ave.. Dad’s banner was right by the middle school (maybe if it was there while I went to school I may have behaved) and Sussex Fish which was perfect. Dad loved Sussex’s and remembered their first location in Cleveland close to where he grew up. 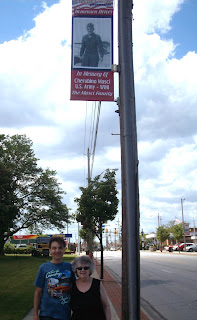 After looking at Dad we hit the road. I wanted to eat breakfast closer to our destination so we waited until Erie to start looking and looking we did. On Peach Street we found nothing but corporate and pizza places. We didn’t eat breakfast till almost 3:30 when we finally arrived in Dunkirk at a restaurant called Demetri's On the Lake. I pulled in and that’s when I noticed this is the pier, one of the places on my list to see. Their food was really good.

I decided to backtrack and look at the lighthouse first then return to the pier to browse the shops. Many times I just rely on my inner feelings on where to go and what to do and the timing turns out to be just perfect as in this case.
The lighthouse and museum were already closed but I still wanted to pull in front of the gate to at least take a photo. There was a car parked there with a gentleman talking to another car that was idling in the road. So I parked across the street and walked over to the entrance. The gentleman said if you wait I will unlock the gate for you so you can pull in.
We waited a few minutes, he unlocked the gate, we pulled in and he allowed us to walk the grounds another unplanned blessing for sure.
The man's name was Dave. He gave us some history and information on the lighthouse and told us how he landed a small part in a movie yet to be released called Lighthouse Unmanned. I am anxious to see it. 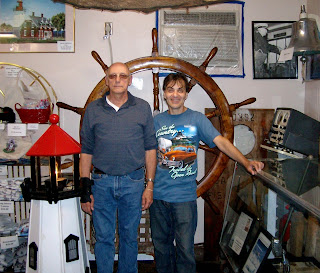 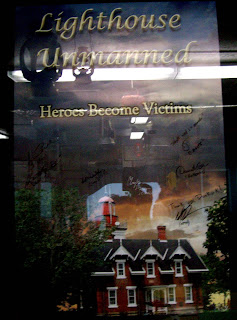 After the lighthouse we went back to the pier. 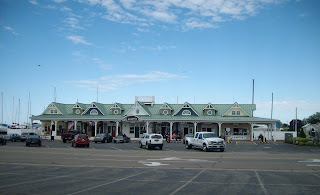 Walked around a bit then tried to follow the directions taken off of Mapquest that turned into one huge rigmarole. I don’t care what anyone says paper maps are still the ONLY way to go. The route took us way off course. We found a nursery that I bought some plants. I asked the lady manning it if she could help with directions. She said yes and proceeded to use her Smart Phone. She wrote the directions down and guess what? We never found the roads on the paper. We ended up in Jamestown and eventually got to Salamanca by way of the interstate.


The cousin I wanted to visit was Dads first cousin on his Mothers side. Because I wanted to surprise Mom I never asked for the address or my cousins last name, I always knew her just as Marge. I figured once in town I would ask Mom for her last name and start asking around. Salamanca is not that big. Unfortunately Mom didn’t remember.  So it was up to me to find the house and I was doing it strictly from memory. I was at my cousin’s house once as a child and again in 2005. We drove around for at least a half hour before Mom suddenly remembered the last name. Cindi tried finding Marge on her Smart phone but no luck. That’s when I remembered I have a photo of the house on my website maybe we could grab the address from it.
Once more Cindi used her Smart phone but the photo from gogobus.cc was way too small. So I said I am going to the library that we passed and use a regular computer to look at the photo.

Salamanca’s library is a real time warp. The furniture is straight out of the 60’s as is the whole place, card file cabinets are still being used but they do have computers. I logged on and found the photo of the house. I walked over to the librarian and asked how long she lived in town and if I could show her a photo of a house. She had to thing I was batty.

http://www.gogobus.cc/travels-remembered/#!
Look for the photo horsing around with John.

I told her my mission and the name of my cousin. The librarian said of course I know Marge, she worked in the library - I worked with her. She remembered the house because years ago my cousin ran a little convenience store out of it and she would go in there as a kid for popsicles. Unfortunately we were told bad news. My cousin died 5 years ago but her nephew whom I never met lived there. Directions were still given and off we went to look at the house and talk to the nephew.

Marge's house happened to be on the street we drove up and down on twice but I was looking on the wrong side of the street. Not bad. The nephew unfortunately wasn’t there so we left a note and off we went towards home.

I drove through Jamestown on the way back to show them the wild eyed statue of Lucile Ball which was no longer there. Someone told us they removed it and put a new statue up of Lucy that looked exactly like her. What is weird is Jamestown has buildings with paintings of Lucy, signs everywhere and a museum but the new statue is now in a neighboring town called Celoron. 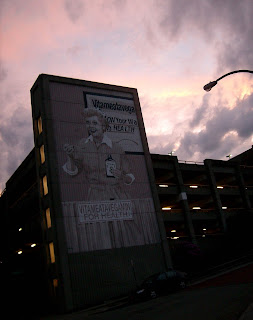 When I first saw the statue I was taken aback as it looked nothing like the famed actress. Thank goodness it is now corrected with a lifelike one. Do an online search and give me your thoughts on the old and new statue.

Anyway Cindi had a taste for fish. I remember just a week prior I went through my notes and placed Alfie's on gogobus.cc. She used her phone again for the hours. We asked someone how to get there and he said follow me. http://www.gogobus.cc/alfies-jamestown/

Hey even if not many people use gogobus.cc it sure helped me twice in one day.

Leaving the restaurant Mom got a call. It was Marge's daughter. Plans were made for a return trip to visit her. A perfect way to end the day.

In summary what a wonderful trip filled with great timing. Some things sure have changed but the memories will always be there. And now a new memory of taking Mom out on a day trip that I can look back on years from now and presently I am looking forward to another road trip back.