Even though I have been using the internet and sending emails way over 10 years I still get tickled by it and never take it for granted.  I have met countless friends and acquaintances through this modern age boob tube, it’s amazing.  For instance there is Dawn Slike whom I never met in person but we have been going back and forth through emails and blogs since 2008.  We fight and have disagreements like close friends, we send prayer requests and support like family and sometimes we are on the same page politically and other times we slide off the page

As I said I never met Dawn but I did get to meet her Mom all because of potato picking.  Ruth, Dov and I drove all the way out to E. Springfield, Pa. to pick potato’s, get back in the car and drive straight back home.  Was it worth it for 3 bushels of potato’s? Money wise probably not but now I can say I dug up potato’s , it looks good on my resume.  But being serious, the opportunity to drive out to a little town that I have never been to before, doing something different and being out in nature made it worthwhile. 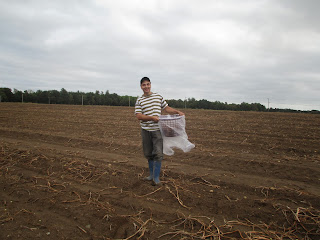 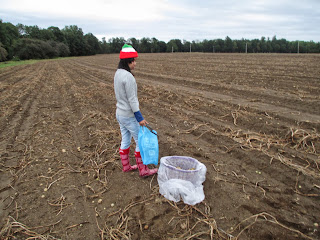 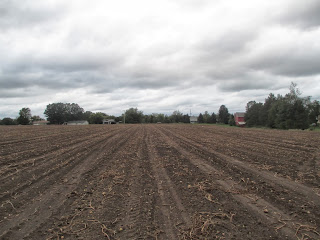 How I met Dawns Mom - We were getting everything packed when we heard someone calling a cat.  Ruth thought it was a kid.  I saw that it was Dawns Mom so I said hello over there you don’t know me but I know Dawn can I come over to meet you?  How did I know it was Dawns Mom?   Because I was informed her house was directly across from the potato field, brilliant deduction.

I had a nice conversation with her.  I asked how is the scrabble battle going are you beating Dawn yet?  I commented on how I loved the look of her house.  She told me it was built in 1850 and more than likely a water station for passengers aboard the train that would pass from Erie to Pittsburg.  She said there are still remnants of the old tracks and features in the house that gives clues that there was a well and a cement basin in the basement.

From there she gave me directions on how to care for the fresh picked potatos and then we talked about canning and yes she also cans potato’s which I didn’t know you could.  She told me simple instructions on how to do it but don’t tell her, I forgot.

Her cat Eight Ball finally came in so it was time to go but not before she told me why she named the cat that.  It’s because is all black with a little white spot. 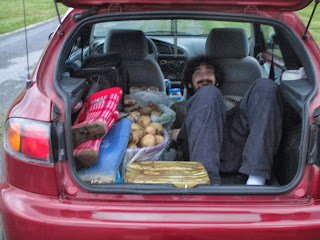 That’s all it’s 2 am and my French fry’s are done.  Well you didn’t think I would pick three bushels and not make fry’s - did you?