Hey Gang,
Here's update part two though its been kind of quiet, haven't been hearing much from some of you. But here's some of the things I do know that I can pass on.
This ain't recent news but it was the first time I saw Mark's new bike, so to me it is. The bike's a beauty, a Yamaha 1100. They have come a long way. Heres the link if you want to see what one looks like.
http://www.starmotorcycles.com/star/products/modelspecs/19/0/specs.aspx
The color of Marks is raven with flames. Congrats again Mark.

Shirl has a full house. Shirl has allowed her granddaughter and husband and their two babies to live with her until the granddaughters apartment becomes available. Shirl only lives in a one bedroom so I applaud her for opening her house to her family. All to often today families shuffle off other members or close doors just because of the inconvenience.

My brother in law who has numerous health issues came through the gall bladder surgery with no complications. Thanks for the prayers.

Jeff B. and his mother went on vacation recently to Cancun and saw amongst many other things the Mayan Ruins. His Mother is 90 and shows no signs of slowing down. In fact Jeff was worried that his Mom may of planned to much and wouldn't be able to keep up.

Jeff M. resumed truck driving once again. He is somewhere out on the road as you read this. Last night he was in Illinois heading to Dallas.

Moms & Dads new pooch. Since our poor Bo went to the pearly gates about 3 years ago and our cat Gracy went more recently Dad has been wanting a furry friend. My niece spotted a two year old Italian Greyhound/Fox Terrier mix. So my sister went out and bought it for the folks. Her name is Sophia. Having a grey hound mix and a fox terrier before, this lil dog has both traits. What a blessing this dog is. Wonderful disposition and has taken to all of us instantly. And now Dad is happy.

Emily from California contacted me. I met her during the primaries back in Dece. in a political chat room. She got married this past winter and is doing fine. Emily said between classes, debating with muslims etc she's been super busy. She has started a blog and asked if I would be the co-author. And to that I said YES. Emily I believe is even more Conservative than I am. Look out liberals on the west coast! I will include her blog next writing, stay tuned its worth a read especially if you are a woman.

And finally I will include Rowe's comments to Ter'.
I liked Ter's letter. I didn't know he was such a good writer. All of us who have lived through the good and bad times of this country feel the same, deep love and pride for being American. Through out history there has been seasons of good and seasons of bad. From global warming to the ice age back towards global warming, from peace to war and back to peace, from prosperity to ruin, from health to sickness. I don't think we should panic, but I know we should pray. Just my opinion.
Rowe
And that is a terrifc way to end this email.


If you care to add what you have been up to just send me an email and will include it.

Hey Gang,
Its been awhile, well I mean its been awhile since I wrote a Hey Gang update of sorts. Things since late July have been on a whirl wind. All kinds of good and all kinds of ughhhh! Just as Dov said, he made that observation during our phone conversation last night. He said you know what I notice about you is that something fun is always happening to you which is good but then you have to add in something bad. BUT thats just my life. I don't make this stuff up, it just happens to me. Sometimes I feel like I am a ping pong in a hurricane. Its always up and down and a lot of times both happen at once......thats just my life.
Lately I have been spending a lot of time with Lisa, as if you didn't know, helping her through a rough spot in her life. BUT, have to say, I am enjoying the friendship, its been fun even through her trying times. There I go again, a good with a bad.

Some of the stuff that has been happening in her life has been a real Hummina hummina. Two weeks ago Lisa came to visit and stayed with my sister Cynthia. She just adored my sisters house and felt right at home. In the cupboard Lisa found the same coffee she used, the same pot and when she went to use the shower it was her brand of shampoo. I would say that would make one feel at home. Later on in the day we went out to the Miscellany Barn in Painesville. It has three houses and one barn filled with antiques, junk and furniture. Who does Lisa run into way out here? Her cousin. Maybe at a busy mall or something like that, but at an antique place. Ya just can't make this stuff up. Afterwards we went to the Perch Fest which is another whole story in itself. What a lame festival. It hardly had anything to do with perch other than one tent serving perch and the line was a three hour wait for the dinner.
Sunday Lisa was a bit disappointed that she didn't make church. Waking up a little late we weren't sure what we were going to do. But Rich left a message saying Punderson State Park 1 o'clock so I decide to drive out there to see what was going on. What a surprise, his church was a having a lake side baptism, I forget the exact term his Messianic Church uses but it is similar to a baptism. We got there near the middle but still enough time to here a few testimonies and baptisms. It may not of been the type of church Lisa is use to but it was a church service. it was just a fun weekend.
OH one more thing about Lisa. She is looking to move and find a new house. The house right next to her parents place is for sale and it's in her price range. She is very excited about that. Hopefully it will work out for her.
I wrote all that about Lisa not only because I write about what is going on in my life and she has been a big part the last few months but also because of all those, for lack of better words - coincidences. Though I am sure quite a few were definitely God directed, maybe not the coffee unless it was Chock Full of Nuts because Chock Full of Nuts is that heavenly coffee.
Next installment I will give updates on the rest of the Gang.

Gotta GoGo!!
Carey
Posted by Carey K. Masci at 2:59 AM No comments: 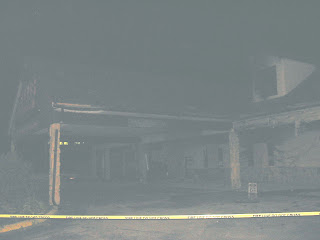 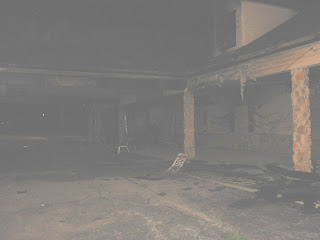 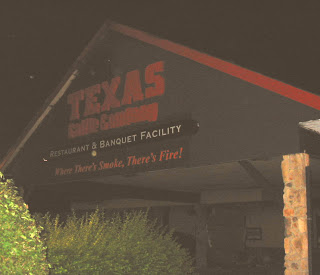 Hey Gang,
I finally stopped at the Texas Steakhouse in Mentor which was formerly Road House and before that it was the Original Girves Brown Derby to take photos. Mom and my sister Cindi tipped me off that I needed to. Why? Just look at the last photo with their slogan, you will understand. It was late at night with very little lights but I think you can still see that from the fire it was a total lose. But their slogan is kind of prophetic, huh.