Well I won or did I? One charge was dropped, one was lowered and zero points on my license but a stiff fine was still paid that made my wallet say OUCH!

Let’s rewind and start from the beginning. On Saturday July 30th I went to the West Farmington Festival which is in the Amish country of Trumbull County in Ohio. It’s a hokey little festival but refreshing. I enjoyed myself. Because of the tickets I received I didn’t give it a review or write about it until now. If you didn’t feel welcome would you?

I parked on College Street right in front of the field holding it. I could have easily made a U turn when leaving with my lil Daewoo but it was dark and foggy on a poorly lit road with Amish, horse and buggy and kids everywhere so drove until it was clear then turned around

Going back on College Street I puttered along at no more than 10 to 15 mph. I stopped at the stop sign at the intersection of Rt.88. A car was approaching and instead of waiting I zoomed out and then I resumed my low speed. Unfortunately the car I raced in front of was a cop. He followed me a good distance I mean a good distance. Once we got past the area of the festival and a road crew I picked up speed to almost 35 mph when he finally turned on his lights. Why did he wait so long? That aggravated me.

He approached and said you ran the stop sign and didn’t use a turn signal. I was so confused, yes just like a deer in headlights. I said slowly I stopped. Back and forth, no you didn’t – yes I did. I did however admit to the turn signal, no argument there. In my defense if there even was an argument, there was no one behind me, no one in front and no one to the left and moving so slow it just slipped my mind to use the turn signal.

Anyway I mentioned to the cop my clean record and no ticket since 2008 and he replied I can see that. He then said I am giving you a ticket for the stop sign and no turn signal. I was fuming mad. When I got home I checked on the waiver fees, it was $300 for both with 2 points for each infraction. YIKES! 4 points $300 fine just for a leisure night out!

I will be a brief as possible because I have a lot to write about but quickly I can completely understand the angst and frustration with cops. Now I am not talking about the Michael Browns, I am talking about the average citizen who is really victimized by our system. In this case 4 points and $300 instead of a warning or a courtesy to a person with a clean record, out minding his own business, not under the influence, not speeding just cruising slowly enjoying a summer night.

John, a friend, told me one of the reasons why he hated being a cop. There were cops where he worked who would have contests to see who could give out the most tickets. Plus he enlightened me to the meaning of ORC and ORD. ORD = city ordinance and ORC = Ohio Revised Code.

When he was employed as a cop he would mark the ORC box. He was reprimanded and told to mark the ORD box instead. The reason is the city/town keeps all the money from a ticket whereas ORC you have to share the fine money with the state. John had enough and quit. The tickets I received both had the ORD marked. Aren’t turn signals and stop signs state law? It’s all about the money and rarely safety. 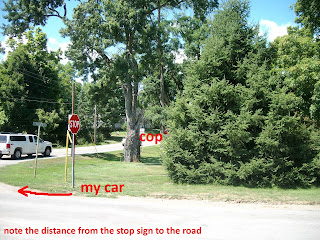 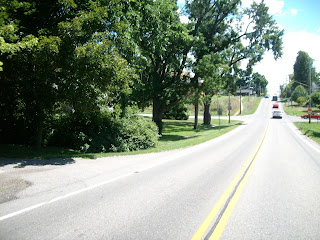 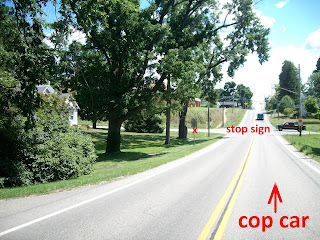 I was so upset with these tickets I drove back to West Farmington which is about 55 miles from my house twice to check out the spot where I got the tickets; well it would have been one if I remembered to bring my camera the first time. The more I looked the madder I got.

So instead of waving the tickets I went to court way out in Newton Falls that is 60 miles from me. The first appearance was for a plea which the judge said it seems you have questions and concerns so maybe you should plead not guilty and meet with the prosecutor. So I did. The second court date was Thursday the 25th of August.

I will say this as much as I was upset with the cop and the cost of these two tickets and the time spent on them the judge of Newton Falls and prosecutor restored some of my faith in the system. Both were cordial and made you relax, definitely not heavy-handed.

When I met with the prosecutor I was prepared. What also helped was they summoned the patrolman but he never showed. The prosecutor could have issued a continuance but wanted to get it over with it. So I presented my case. I showed him my book. HUH? Yes my Hey Gang! Ready to Go-Go? and started with I am an author and I travel to these little festival/events and write about them. The prosecutor said I seen that vehicle… was it outside in the parking lot? Yes I slept in it for my first court appearance so I wouldn’t be late. Well that vehicle attracted a lot of attention.

Then I proceeded to tell him that even the phone number on the ticket the cop wrote to call the court house for the time and date was wrong. I showed him the photos and admitted to the no turn signal. When it was done the stop sign was thrown out, the no turn signal was lowered to an equipment violation and was able to keep my record clean of points. Thank God!

The final cost was Stop Sign - $5 court costs and the No Tail Light - $100 fine $95 court costs $30 misc. costs for a grand total of $230. How ya like that? So even though I won I still paid court costs and what is the 30 bucks for misc? A fine should be a fine not all this added nonsense. America is messed up. You can never get true justice when they look at us as revenue. Small annoyance tickets like this people rarely fight because it is cheaper to pay.

After court I went on a long leisurely stroll that covered miles all the way from Newton Falls, Warren, Mosquito Lake to Andover and Pymatuning Lake on home.

First stop was for breakfast at a truck stop outside of Newton Falls in Leavittsburg called Shortstop Truck Plaza, independently owned and run. The breakfast was delicious. 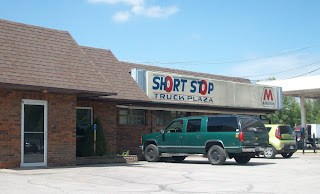 The owner each morning goes out and buys fresh sirloin for the ground meat. The owner’s daughter told me one early morning Jesse the son received a call they were out of potatoes. So at 4 am he was out getting potatoes. 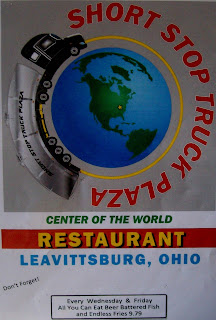 I carried my book inside with me. Whenever I travel I always carry my book with me you never know who may buy a copy. I was making small talk with a lady the next table over and said I am an author take a look at this while your friends fills out her application for employment. I sit back down and it made me feel so good. The lady opened my book to page 69 and had an expression of amazement. She told her friend is that from God? I felt wonderful.

I forgot her name but the church lady met her friend for lunch. The friend is going through some trying times. She is looking for a job and the restaurant was hiring. Then the church lady was trying to encourage her when she opened my book. God works in ways we can’t see. 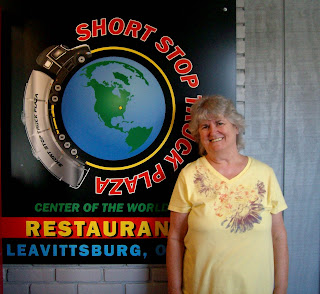 From there I drove through Warren and stopped at an antique shop called 1717 Antiques. Definitely one of the better antiques stores around. What I like about it is its very cluttered with things strewn all over from every era. I like the hunt of finding a neat collectable. 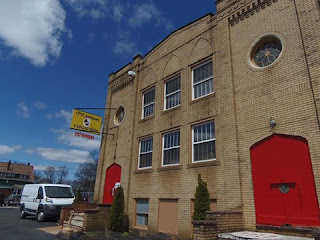 I ended the day somehow in Pymatuning. I went to the beach but instead of swimming I laid back in my car and took a nice nap before the ride home.

Hey Gang,
What a fun Saturday.

I went to the 2016 Jimco Jamboree Vintage RV Rally in Thompson. 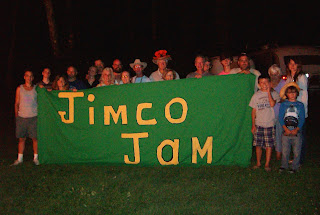 Jimco and his wife Lydia host the free event on their tree farm. What great hosts, they have such easy laid back personalities you feel right at home.

Jimco helps you park and then greets you with a wooden pallet he places at your rv door so you can enter your rv without tracking mud or dirt in. Nice touch. And some of the sites come with electric hook up. 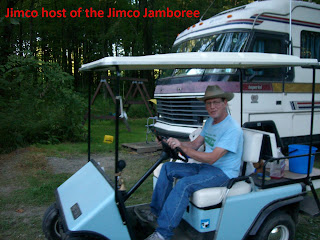 I parked right next to the pond that has a fountain in the middle of it. I needed no sound machine as that made a nice soothing sound to put me to sleep. 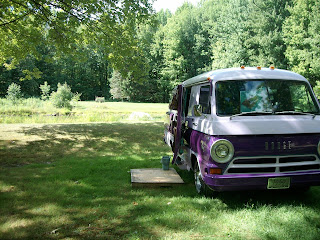 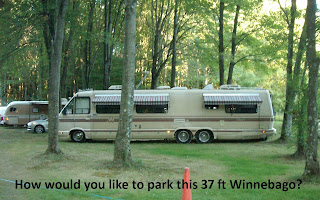 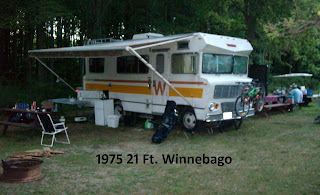 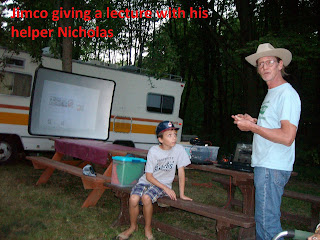 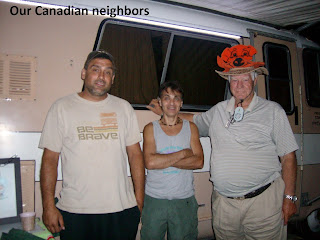 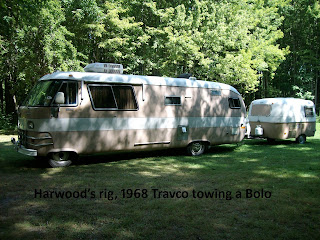 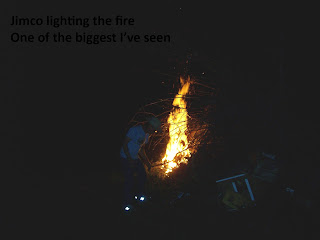 I hate mentioning anyone when there is a group outing because someone always feels bad for being left out, for that matter I do also for leaving someone out. The whole group was great. The Canadian’s who attended were great to talk you. I love our northern neighbors. And then there is Harwood. Who lives up above us in Kitchener I believe. Harwood is one card. The man is beyond funny. 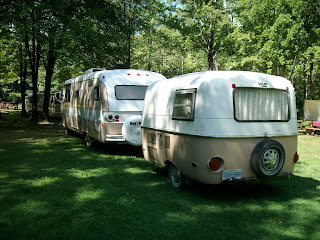 Sunday morning I took a long loop home to take a look at the scene of my travel infraction, which is a whole other story.
That route had me going through Middlefield on to West Farmington where I received my ticket a week before at the West Farmingtom Festival. I parked the Go-Go Bus at an abandoned school and walked around snapping photos of where I was pulled over.

A lady saw me and asked is that your van? My daughter would love it. I yelled back Hey can I give her a postcard it has the Go-Go Bus on it? She turned around. Her name was Marie and her daughter’s name is Katie who was riding around New York on a Harley as were speaking.
Marie and I talked for a bit, gave her a quick look inside the Bus and she bought a book. Nice! She took photos of me next to the Bus and a selfie of us.

Hmmm…. Question…. A selfie is where a person takes a picture of themselves so is a selfie with two people a twofie?

Anyway…. Hi Marie and Katie if you are out there.

I did quite well with the selling of my book over the weekend. Some sold at the Jimco Jamboree and one on the road. And that’s usually where I sell the most books at events or meeting people. The Purple People Greeter is always having people stop it to take a look.
I love meeting people and my book Hey Gang! Ready to Go-Go? connects with people who love road trips, travel and have their own experiences. Then there is the group of people who buy my book just to shut me up. But I love them to.