Hey Gang,
So what were my thoughts on the great eclipse?

I was late jumping on the bandwagon for joining in on the hype and excitement. When Janet mentioned going down to Tennessee to see the eclipse, I viewed it more as an opportunity to travel.
But traveling down there that was all people were talking about.
The newspapers had headlines such as “Schools to close Monday for eclipse”.

Quietly the excitement was building inside of me. Then standing there with people I just met who were really into it made me giddy like a child on Christmas morning.

The eclipse started right on time about 1:30. Slowly, very slowly the moon started covering up the sun.
When the eclipse was in full what was a hot day of low 90’s cooled down a good 20 degrees.
Then it got very quiet out. An owl or something cooed or hooted but that was the only sound, well besides us yelping and hollowing at the moon.

But what I thought would be darkness like at midnight was more twilight like. I also thought it would last much longer but as quickly as the sun was covered it slowly was being uncovered. It was still fascinating to witness and something I won’t forget.

During the hoopla we tipped our glasses and saluted the event. What was that firewater? Yowee!

Thank you again Karen & Michael for opening your house to us. What an experience, I was blessed.
But wait I am not done yet with this saga, there is still the kayaking and Cumberland Falls to write about.

If you want to see the most horrible video watch this link. I can do somethings right, other things I excel and then there is video.
Take some motion sickness pills before viewing, you have been warned.
And yes I used that YouTube feature where you can edit and stabilize a video but that only slightly corrected the mess.

Hey Gang,
It’s amazing how different a place looks in the daytime.
Karen’s property was not eery at all but it was as rural as can be.

Where I parked I was concerned it was too close to the road but found out that the road is a dead end with only two families living on it and Karen's family was one. 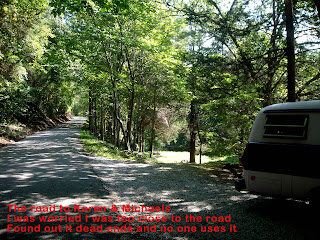 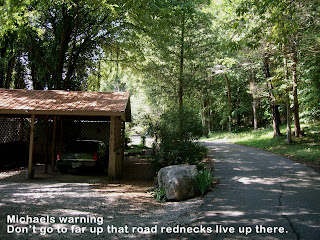 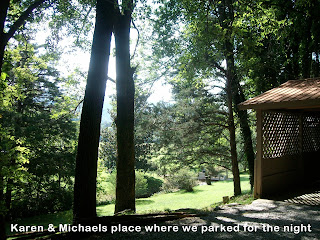 Karen didn’t exaggerate when she said we would wake up to some beautiful scenery, it was an understatement.
They have such a wonderful spread. Her parents bought the land in 1972 and built the house right next to Rocky River.

My thoughts then briefly went back to where is Janet? The ranger said stay away from Rock Island, her and her family could be enjoying all this. Oh well.

I asked if I could help with setting up for the eclipse party but they already had everything under control. I decided to hurry to a store and buy something to contribute to it.
The options were drive back into McMinnville or much closer was the HWY 30 Market which is where we went.

I walk in. Gary the owner says hey neat vehicle. I introduce myself. He asks to see my book. From there it went like this....
Sure we can do some swapping. So I ordered a fried pork chop sandwich, a ham & cheese sandwich, (both were delicious especially the pork chop) a 2 liter Sun Drop pop, a water melon and a newspaper. Gary received the book.
If ever around the Rock Island, Tennessee area stop in HWY 30 Market order a sandwich and sit a spell. 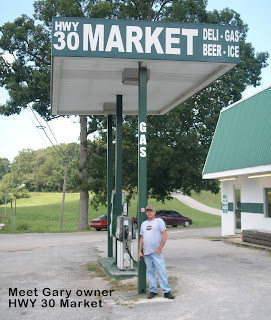 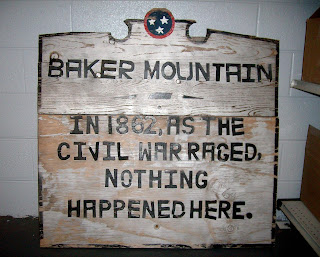 It was now back to Karen and Michaels place but not before stopping at the cemetery to check on my phone messages then we would return and await the big event, the eclipse. 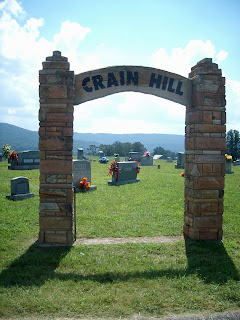 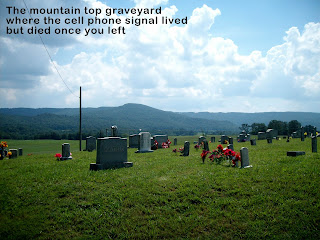 When we returned they had everything set up right on the bank of the river. While waiting I enjoyed a quick dip, wow was that refreshing, talk about cold water.
Karen had more than enough food but only two friends showed plus Ruth and I.
Here I was enjoying what possibly could be a once in a lifetime event with people I just met, now that’s the way to make lasting memories.
To be continued....

Our hiking day was done, now what? Where do we park, where’s Janet maybe she would know?

Usually I can park anywhere for the night but not this time.
I spoke with another local ranger/cop who told me no you can’t do that when I asked if I can park in the overflow lot for Rock Island. I said years ago in Tennessee and Kentucky it was so rural you could have parked anywhere and camped for the night. I know, on a few occasions I ventured off the road and camped with people. He replied not any more, the health department won’t allow it, you need to be on a site and with facilities.
Health department? MY OH MY have times changed. I am sure there are spots you can get away with it but this was Rock Island’s big day for revenue. I saw plenty of tickets written for being illegally parked. I was told to stay away, venture out further for a place to park for the night, it was going to be madness on Monday for the eclipse.

So we left Rock Island, wandered and ended up in the little city of McMinnville, TN. Less than 15 miles away. Did some shopping, then it was off to find a local park with a grill to cook. A cop directed us to Pepper Branch which was perfect.

I circled the park looking for a grill close to where I would park. But the lot closest to the grills sat two cop cars with lights on checking out a car. I wanted to avoid what ever was happening but I also didn't want to lug everything a good distance so I chose this area.
As I walked past I was asked do you know anything about this? Did they think my circling the park was because I was returning to the scene of the crime? I said no, what happened? A car window was smashed and a purse stolen out of it but we can’t find the owner. HUH? That didn’t make sense, if the owner is missing how did they know a purse was stolen? Hmmm!

After my shower I slipped into fresh clothes when I heard Ruth talking to a lady. I peak my head out as Ruth is telling her what my vehicle was. I said hand her a postcard for my book. From there Ruth explained how we were clueless on where we were going.
The lady answered you can come to my place, park for the night and stay for my eclipse party. Ruth said OK. I came out and introduced myself and with that off we went to who knows where following a lady named Karen.
If you don’t know where you are going a last name doesn’t matter either.
Before speeding off Karen warned us there is no cell phone connection once past the graveyard, I will slow down when we get there in case you need to use the phone because once past it the signal goes dead but I do have Wi-Fi at home.

It was a challenge following Karen, she must have thought my vehicle was an overgrown slot car the way she was driving but the Go-Go Bus did good, only lagged behind a bit.
Here we were on some mountain road, following a speeding car, Ruth didn't worry but I was apprehensive as I didn't initiate the conversation to get a good feel for who ever this lady was but God does work in mysterious ways and we were sure on a mysterious path alright.

We arrived to her house and no one was around except Karen and her barking dogs.
She tried to convince me to drive down the dirt path and park by the river and in the morning we would wake to one beautiful site. She also asked if we had flashlights and if we did to go ahead and explore her property, we didn't explore and I decided to stay under their street lamp, if you could call it that.
We were about to pull the curtains and call it a night when the husband came home, introductions were made, our doors were locked, and their dogs kept sentry duty with occasional barking through the night.
Well it will be interesting to see what morning brings.