Hey Gang,Well Parade Day One went FAB!  It was a full rockin' GoGo Bus as Ruth, Dov, Tiffany, Jeff B., Sharon, Margaret and Sabra came along.
The crowd was huge and weather was BEAUTIFUL.
The Bus after all these years still receives thumbs up and WOW what is that thing?  The Bus drove superbly.   Margaret, Sabra and Sharon walked in front throwing out candy and Sharon Silly Stringed kids.  I had the megaphone giving my commentary and asking the crowd questions.Afterwards I dropped everyone off and parked.  Walking back I was delayed by a garage sale and stopping every 10 feet to pick up candy that people didn't catch.  Hey why not recycle, its all part of the go green movement.  OK maybe its just me being cheap but still.....The best thing was the garage sale.  I saw this old Sony tape recorder priced at 50 cents.  All I had on my was a $50.00 bill so the lady said OH just take it.Well am I surprised what I picked up!  Check out these links.http://www.thevintageknob.org/sony-TC-50.htmlhttp://images.businessweek.com/slideshows/20111116/the-best-and-worst-of-sony.html#slide6That's all time to sleepy.    Gotta GoGo!!       Careywww.gogobus.cc 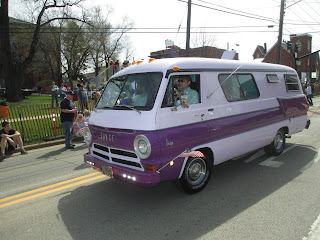 Will be posting more photos soon.
Posted by Carey K. Masci at 12:23 AM No comments:

Here I am where I wasn’t supposed to be but am anyways.

Hey Gang,
Here I am where I wasn’t supposed to be but am anyways.  Malinda rented a cabin in Hocking Hills and invited Ruth and I Wednesday through Saturday. The cabin was supposed to be big enough for 4 so she said I could ask someone else also.  Ruth initially said NO then I thought she said yes so I told Malinda we’re coming and so is Dov.  Ruth then said I never said yes - I am not going.
Malinda then emailed and said the cabin is MUCH smaller just one room but if you want you can still come.  I said OK I will drive the GoGo Bus and Dov and I can sleep in it.  Dov said I can’t
sleep in it, the fumes gives me a bad case of bad brains.  He said let me think about it.  20 minutes later Dov calls and said want to go to Yellow Springs instead?  Sure why not and here I be.

And where Dov and I are now is Beaver Creek at a Marriot Courtyard a 3 star hotel.  Looking out my
window I can see a mall and store after corporate store, what a stark contract to Hocking Hills.  I asked the desk clerk if I could use my grill on the balcony. She said I don’t know and called someone who said NO but they could use the court yard.  I decided on cooking in the GoGo Bus in the parking lot instead.
Heading to Yellow Springs we stopped at a place called All A Cart just outside of Columbus that does restoration work.  I wanted them to take a peek at the Bus at some rust issues I am having.  You should see the cars they are currently working on. One is a Graham Paige.
Here is their link http://allcarexcellence.com/

When we wake we are off to Clifton Mills for breakfast then Wright Patterson Air museum.  We got here just in time because it is scheduled to close in May because of the sequester.

Today went better, much better not that yesterday was bad but I mean the scenery aspect of the trip.

Our plans were to wake early and head to Clifton Mills for breakfast.  Unfortunately we woke at 1pm
and then headed out to the mill.  So what’s the problem? Nothing other than a pancake breakfast at 4 pm.

Last time I was at Clifton Mills was in ’97 with Dad, Uncle Joe and my nephew.  What I remember about the place is exactly the same.  Pancakes are still served so large that I could only finish one in the stack of two.  I ordered mine with chocolate chips.  Wow so good but who could eat two?

During Christmas they light the mill with 32 million lights.  Who counted them all?  But thats what they say.

Nothing has changed in Clifton.  Same as it was probably a 100 or so years ago. Not kiddin either. After breakfast we went to Clifton Gorge voted at one time in National Geographic as one of the most beautiful places. My memory was a bit fogged as the trail seemed different.  It wasn’t
changed I am sure of that just remembered it differently.

Off the trail I noticed a small piece of glass from a bottle.  I had to investigate.  So I got off the trail that is clearly marked danger steep cliffs stay on path.  I found an area that is strewn with bits and pieces of OLD pottery and bottles.  The way the glass is made I dated the pieces to mid to late 1800’s easily.  I searched a good 20 minutes but came up with nothing whole.  I marked the spot with my vid camera so I can go back to resume my dig but I ain’t tellin’ where it is – HA!

Before the breakfast and hike we went to a college town called Yellow Springs.  My GoGo Bus fit
right in.  It got a new nickname.  Someone called it a New Age Mystery Machine.  Yellow Springs looks like a hippy retirement center.  Head shops, tie dye, mixed in with other fun trinket and clothing stores with old and young hippy’s walking around.  A few cafes, food vendors on the street with usual and unsual fare.  Dov wanted to try the goat curry but the pancakes were waiting.