Going Backwards then Back to Forward


I should complete the Dayton story but I never told you about the day trip to Columbus with Walt and Jimmy, Jessica and Ruth and I.

They invited me to see the Lake Catholic hockey team play in the semi finals.  Lake Catholic is the school Jimmy attends.  The hockey playoffs were played in the Nationwide Arena the home of the professional hockey team the Columbus Blue Jackets.

The arena is top notch so it was exciting for the high schoolers to be playing in a major league arena.   Unfortunately the Lake Catholic Cougars lost badly, 7 to nothing, a complete wipe out. 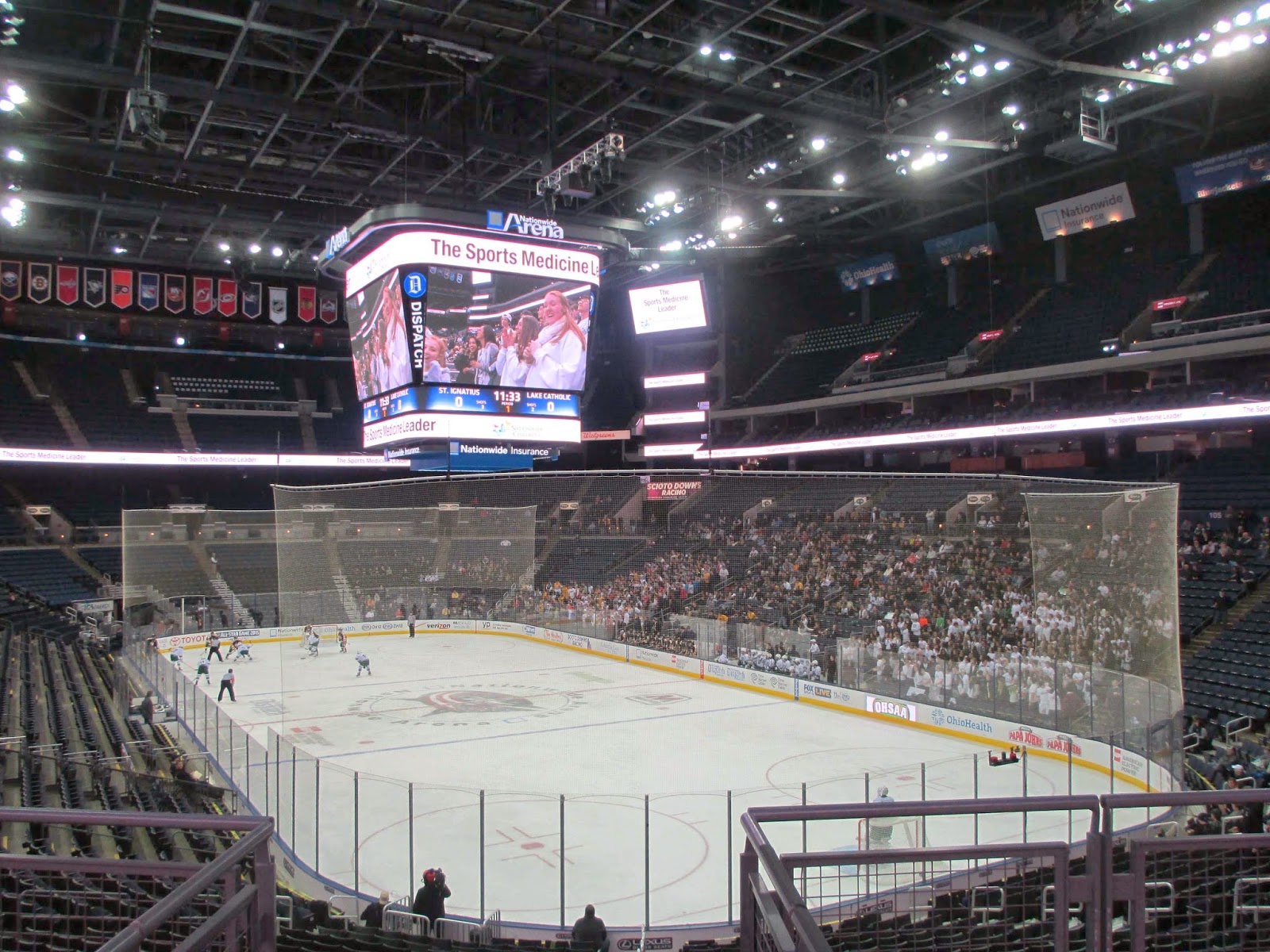 After the game the weather was very mild so we walked around the arena district of Columbus.  It’s not that large of an area but well laid out and clean.   From there we checked out the North Market a place you should see. 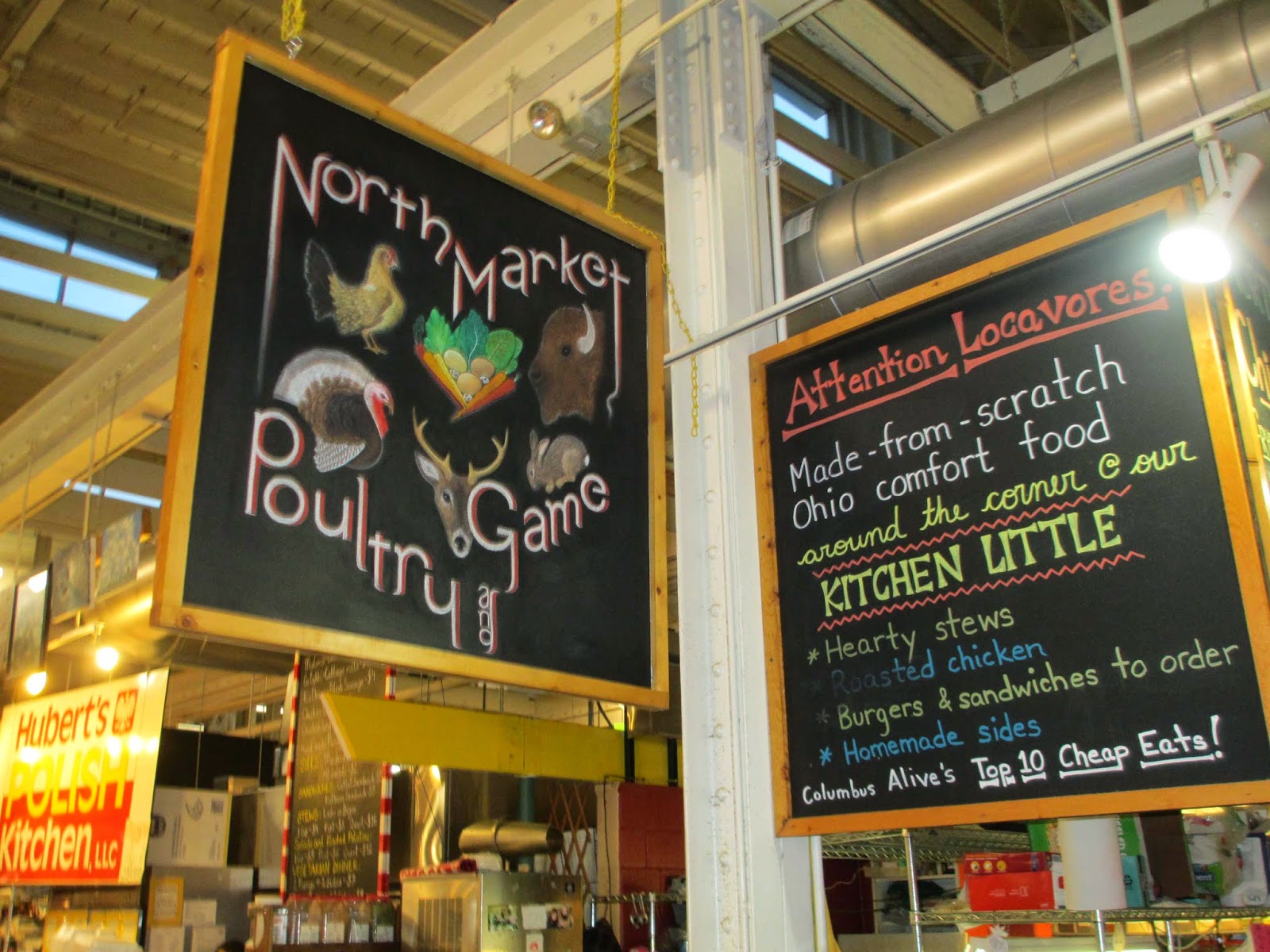 We also quietly looked in the magnificently decored church the Annunciation Greek Orthodox on N. High. 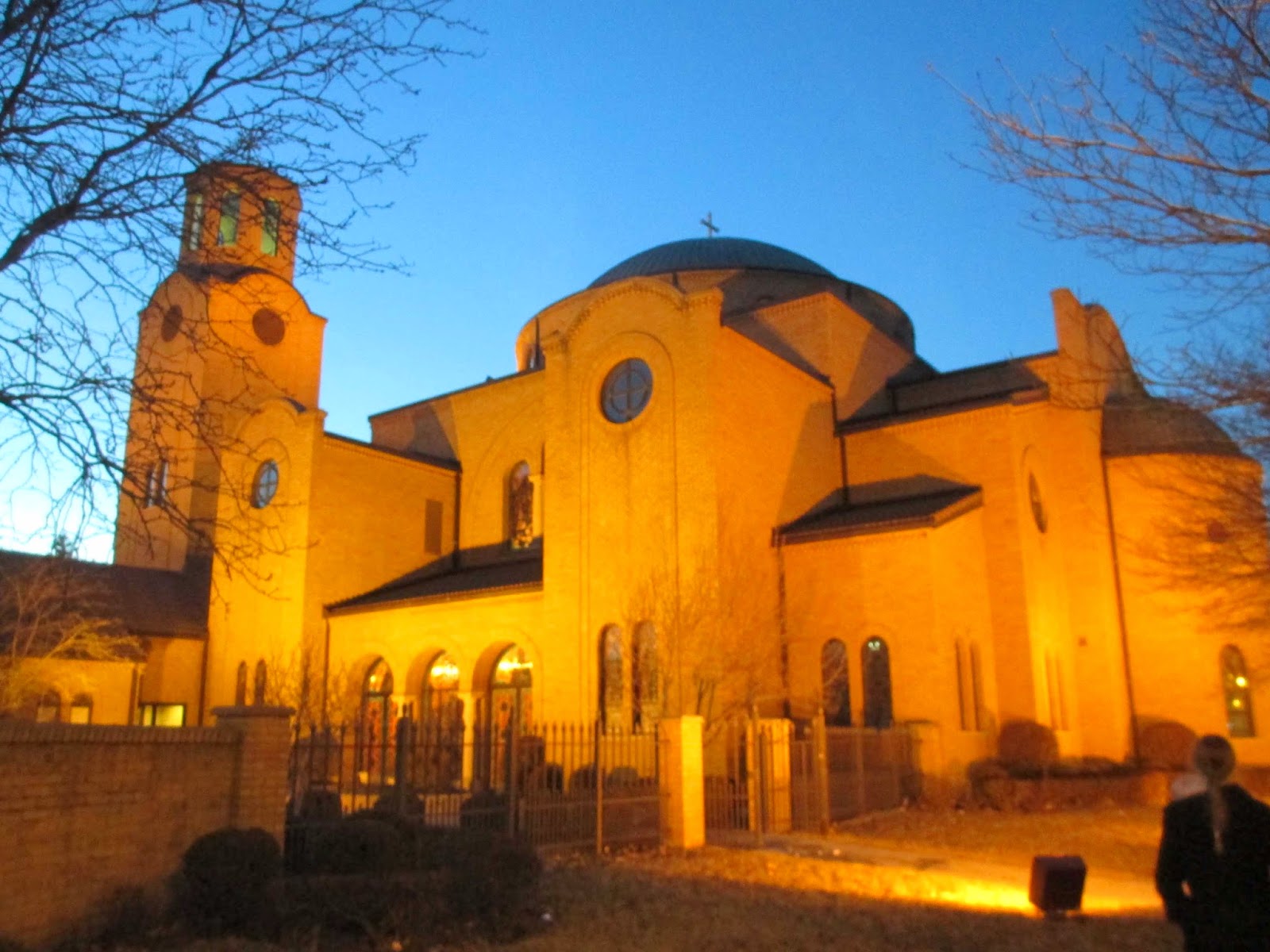 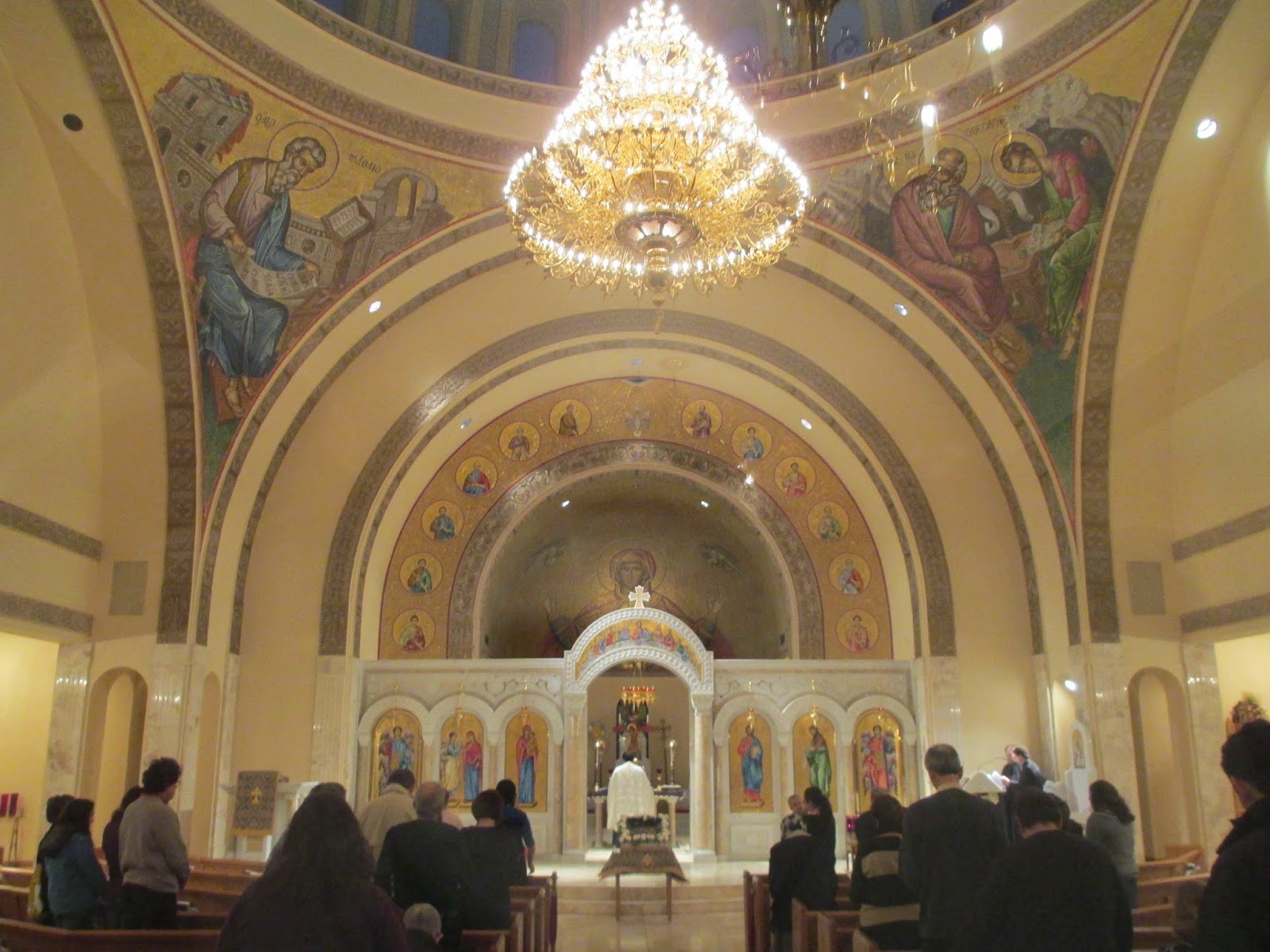 America has some beautiful churches that go unrecognized. The Annunciation Greek Orthodox is just awesome inside. This is the website for the church.

Our walk back to our car concluded with eating at the Rodizio Grill which is billed according to their website as the first authentic Brazilian Steakhouse restaurant or Churrascaria in the United States.  Jimmy picked this place out and he hit it right.

It is a franchise and as you know I never give reviews of corporate, chain, or franchise places of business but this restaurant deserves one.

Our waitress explained how things worked but I didn’t grasp it.
Starting the meal off instead of the usual basket of bread or rolls were Pão de Queijo Brazilian cheese bread made with yucca flour and cheese and Banana Frita banana poppers.  That followed by a trip to the salad bar that had more than just salad.  Quail eggs, different kinds of rice, pasta and things I didn’t know what it was but I tried it anyways and one almost glued my mouth shut permanently.

I saw this granular stuff so put a pile in my dish.  At the table I took a big spoon of it and I couldn’t talk.  It became like paste.  I found out it was Yucca flour that is not suppose to be eaten but usually just sprinkled on your rice and beans.  Now they tell me. 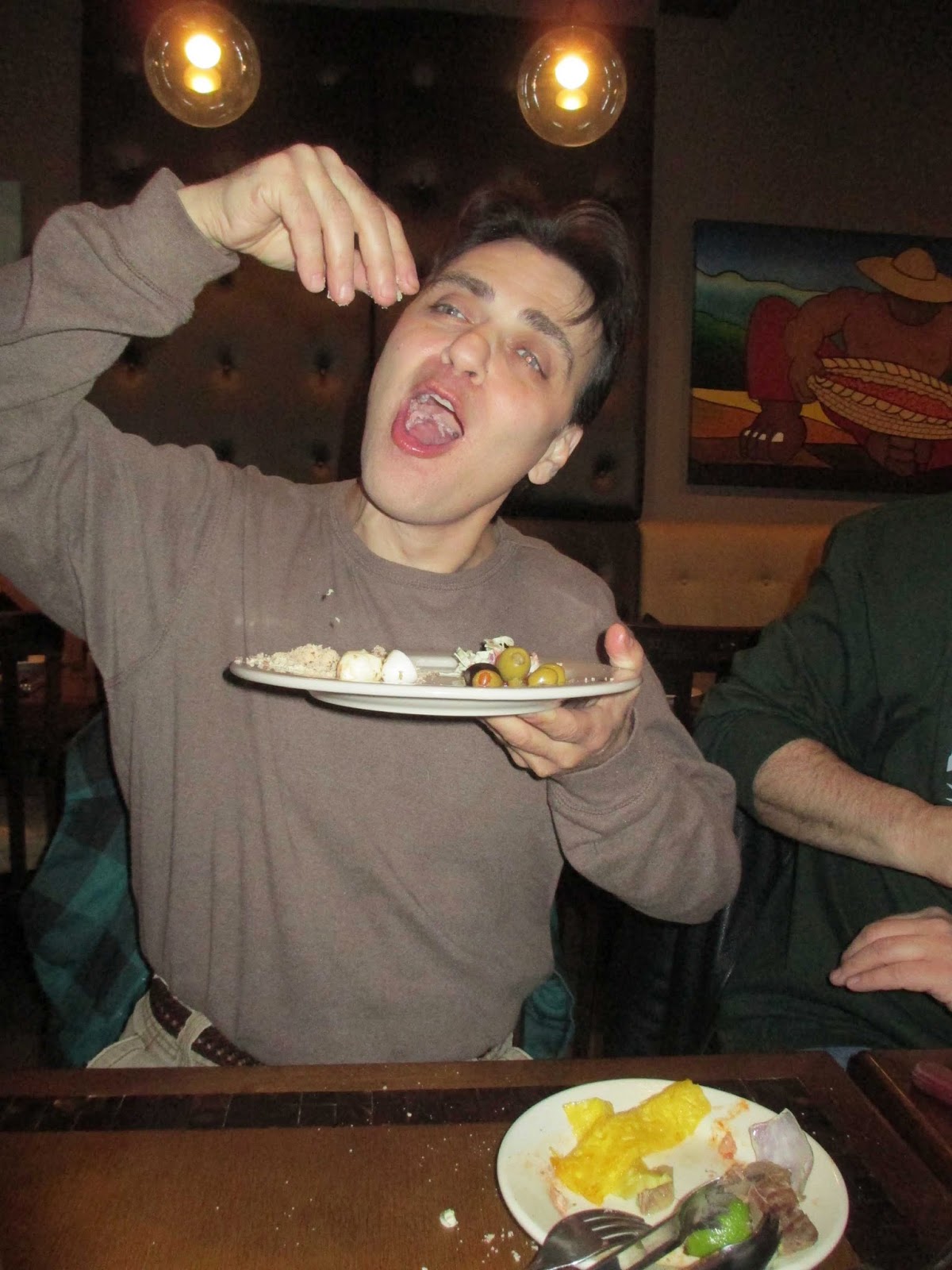 During our salad a waiter with a skewer of meat came over.  I don’t know what it was but when he said would you like some of course I said yes.  I thought it was a sample to help you choose your main course.  But it was followed by another waiter with another type of meat on a skewer.  I got some of that and thought if this is how we will eat we will starve as the portions given to us were so small.

But then I caught on after the third waiter with yet another type of meat.  It dawned on me you could eat as much as you want and eat which ever meat you like.  I think they said there are 30 different meats to choose from.  Included in the 30 is lamb, different types of chicken, pork including longanisa, fish and grilled pineapple.  I lost track of how many we tried.  We left not trying all of the varieties as you just can’t, way to much food, those little portions add up to a lot.

It is pricey but fine for a dress or casual affair and because of the way the meat is served the different personalities of the waiters that come to you table makes it a fun time.  You gotta try it. 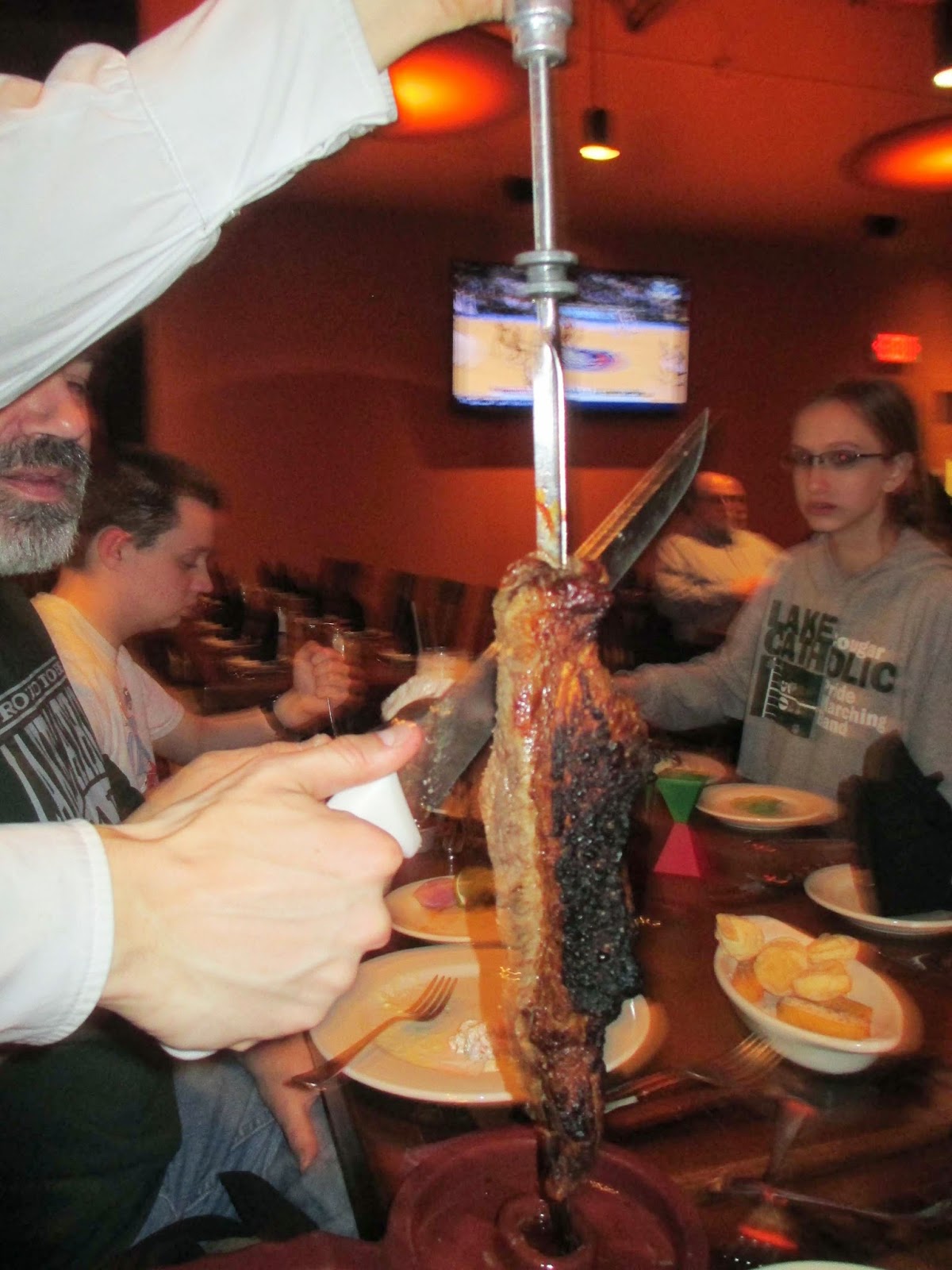 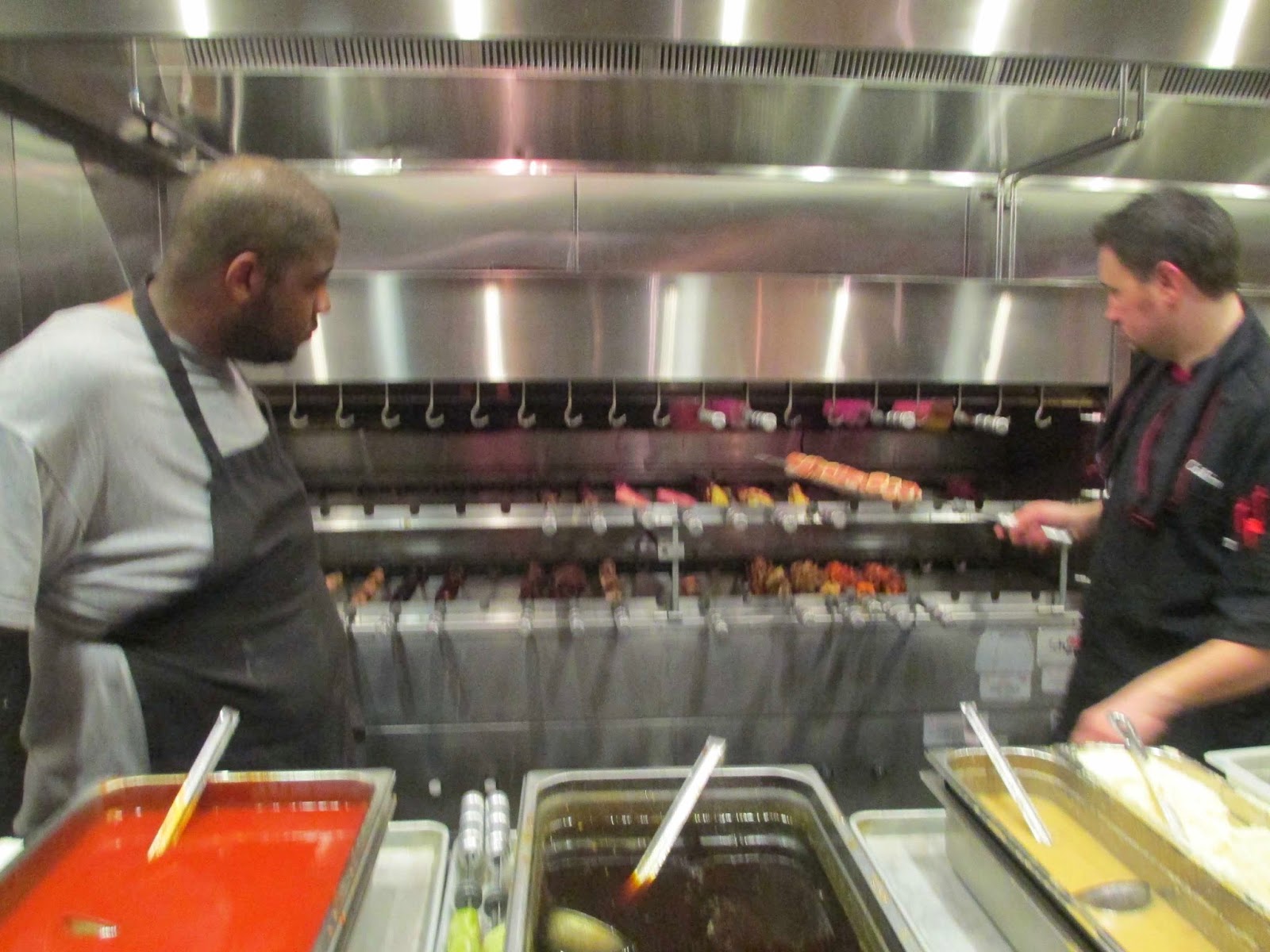 On the drive back we stopped at Buckeye Donuts probably the best I have had. Columbus has really boomed and flew past Cleveland. 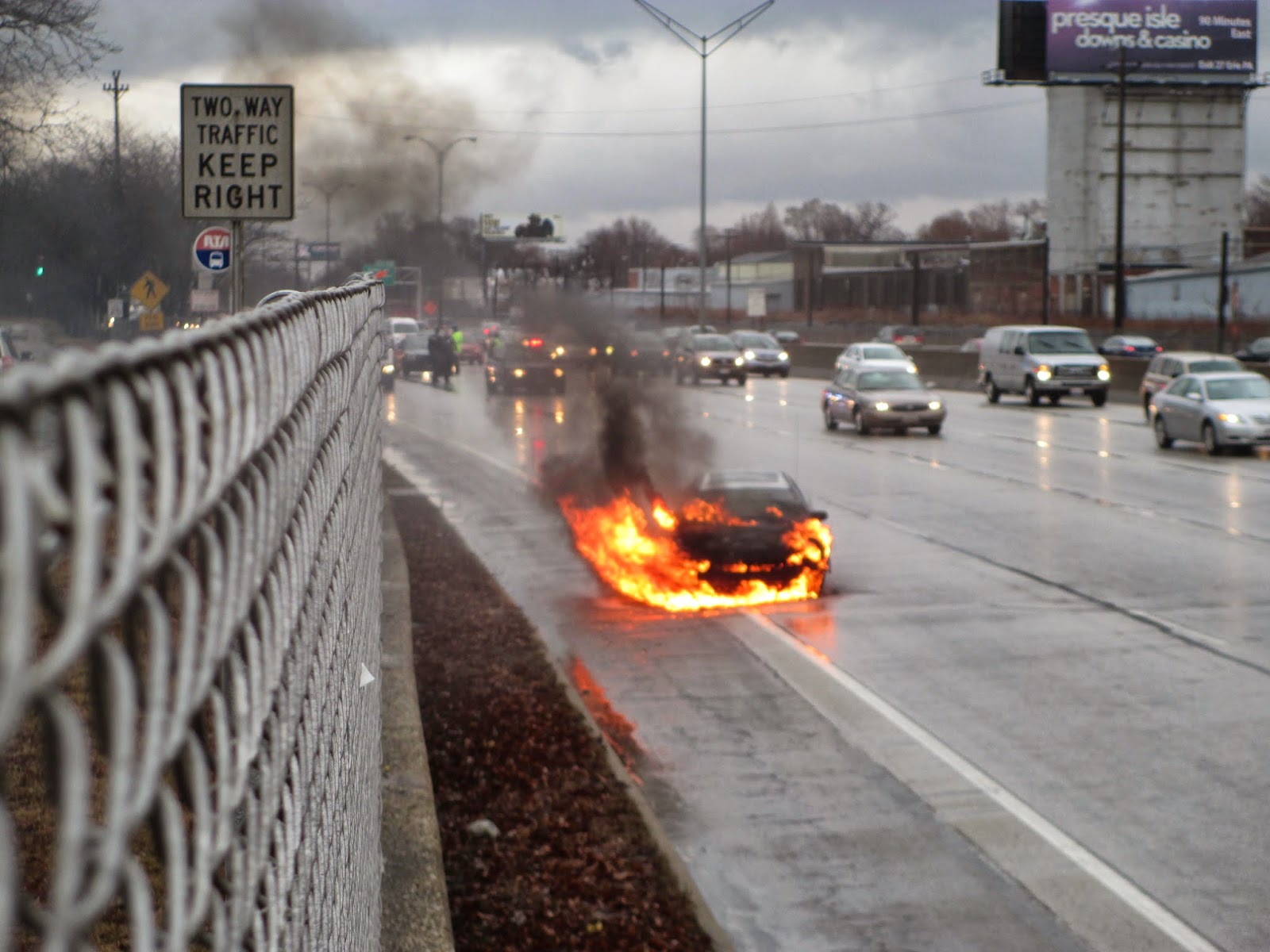 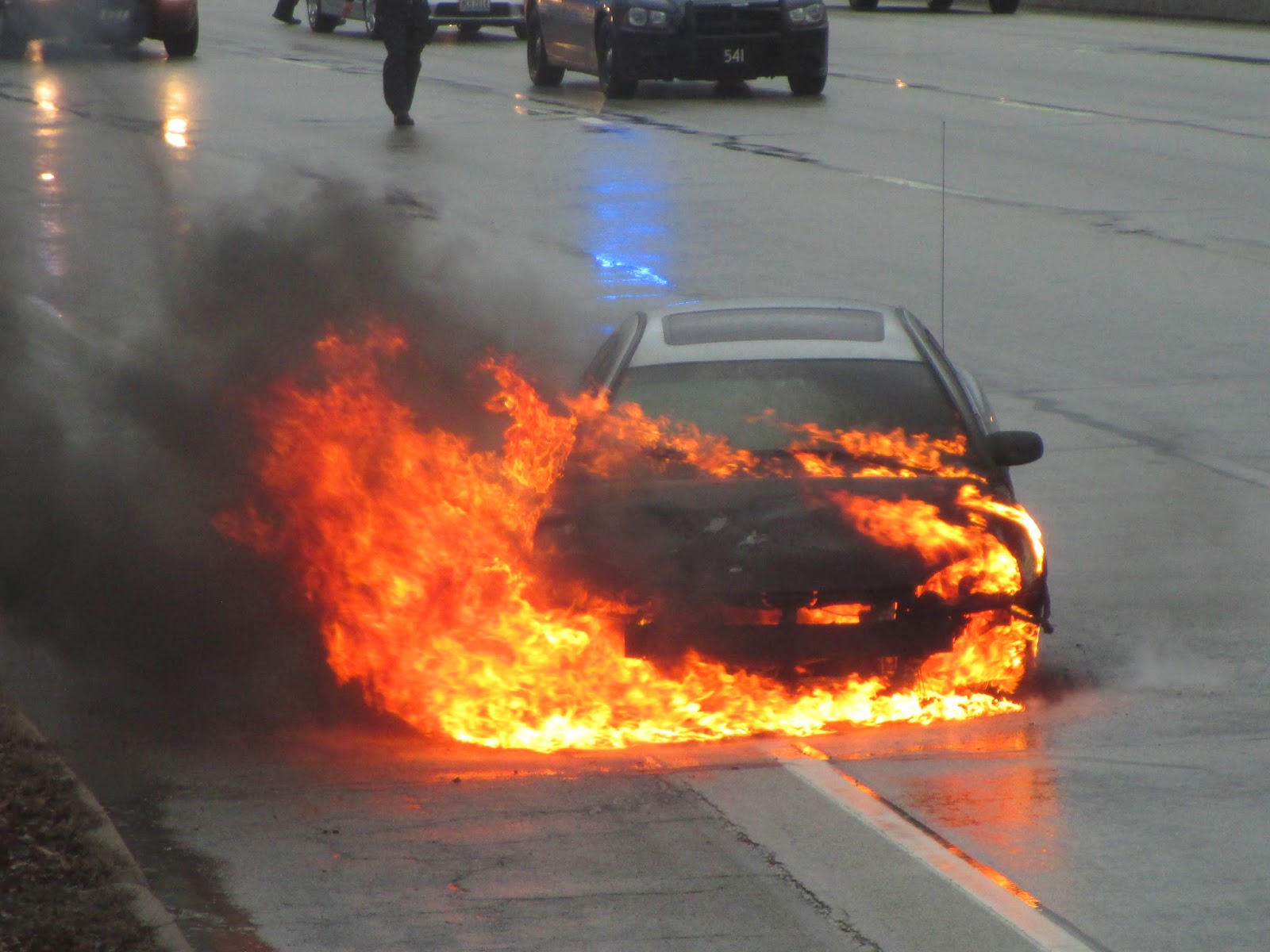 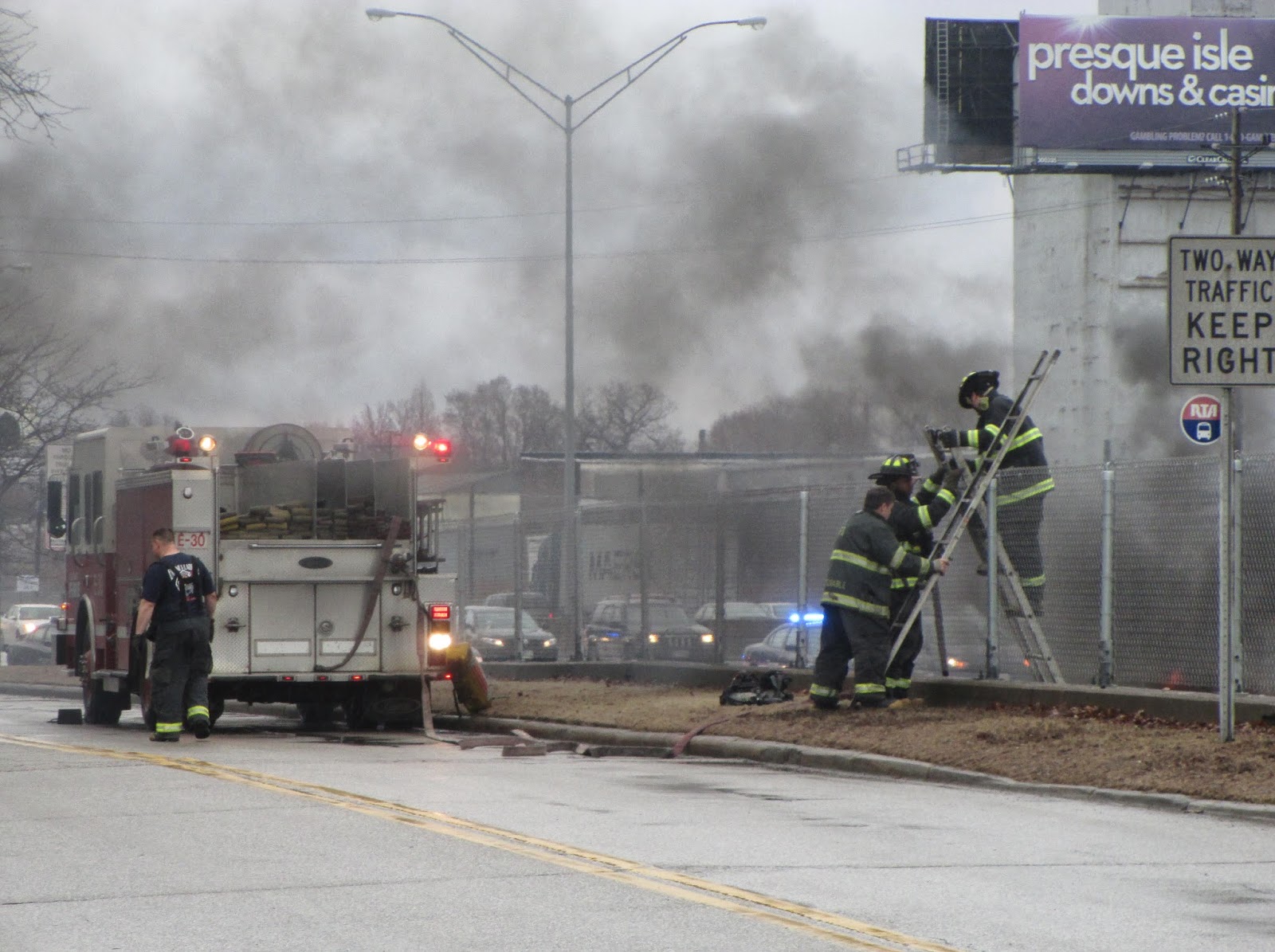 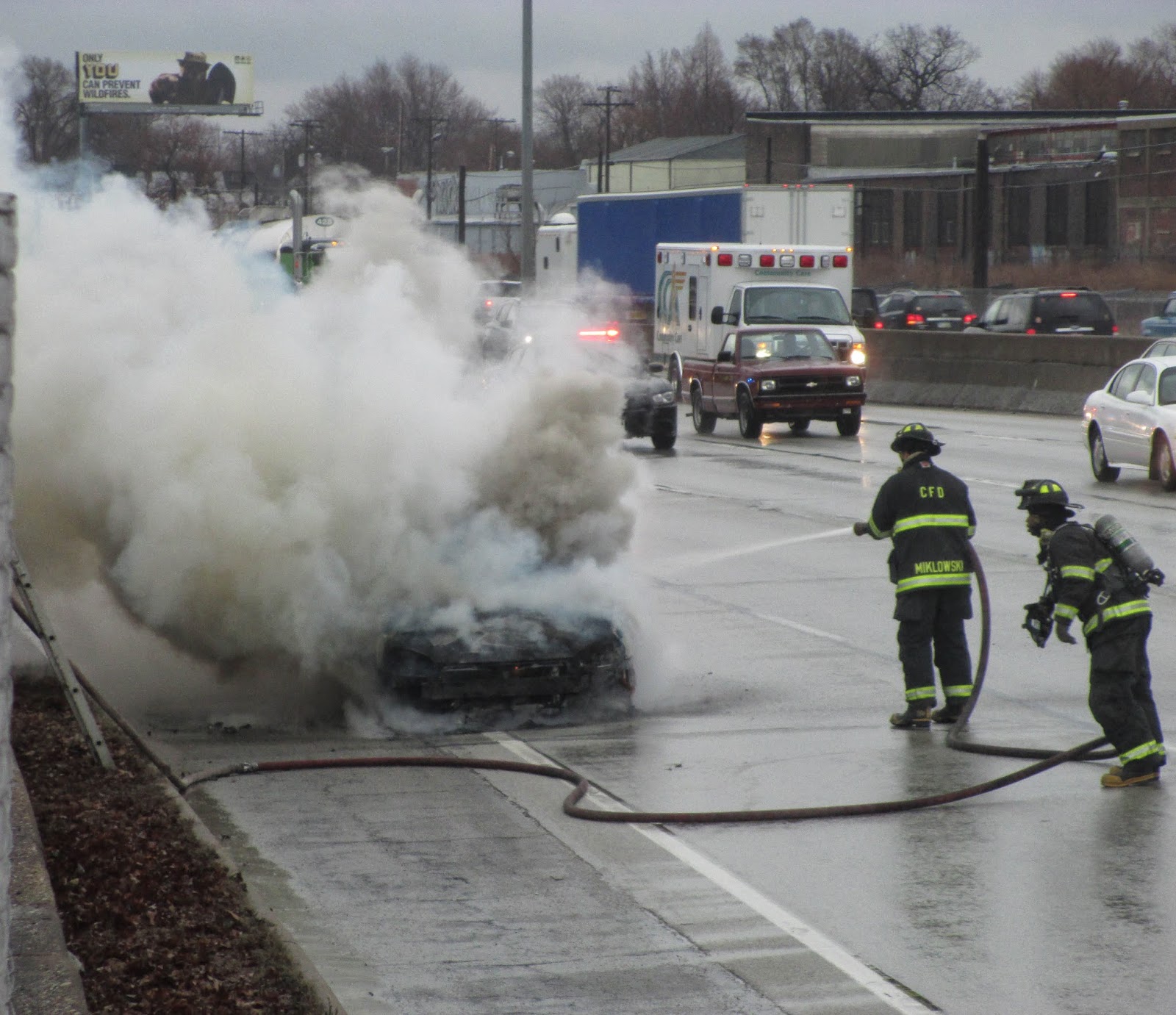 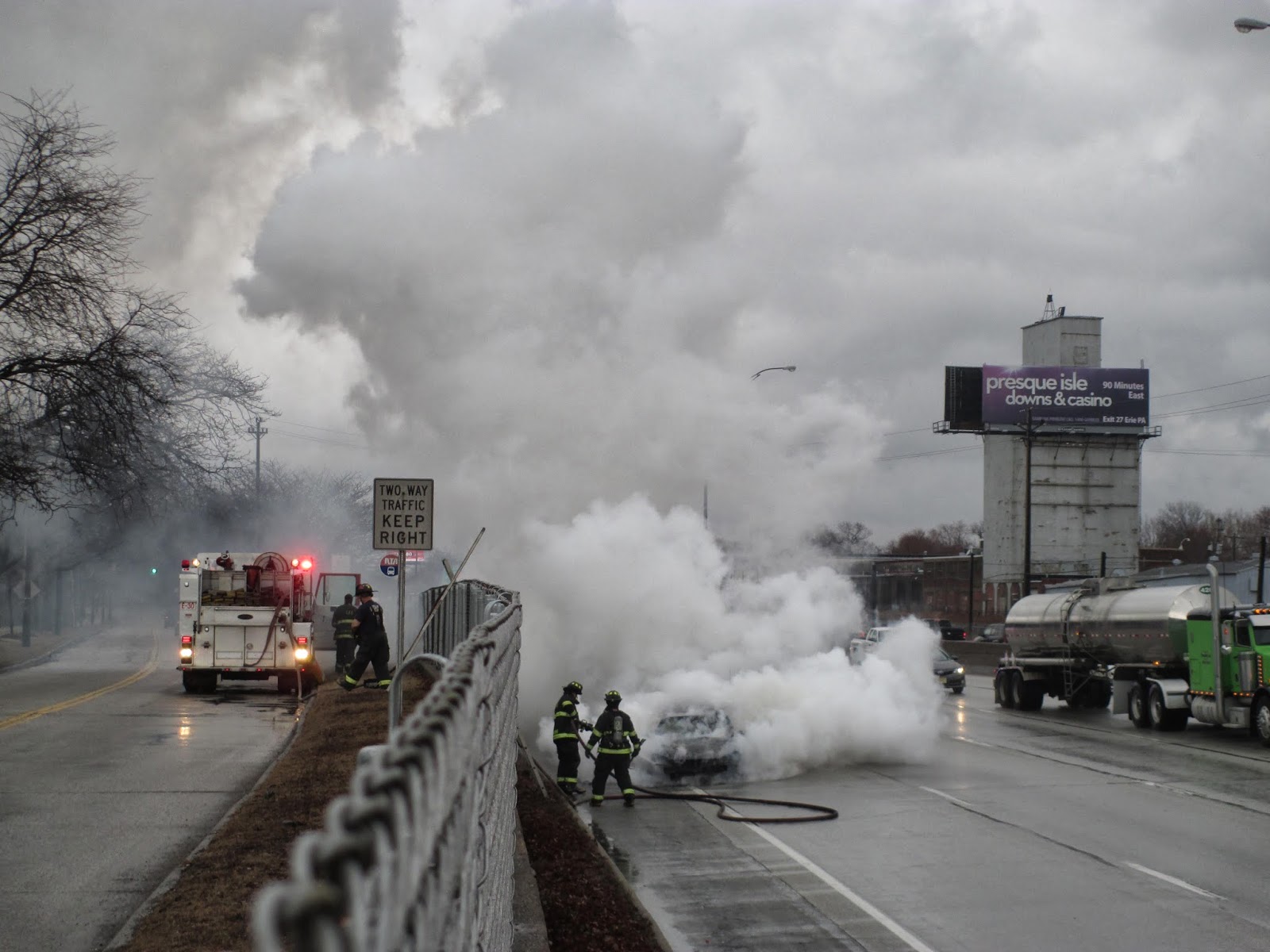 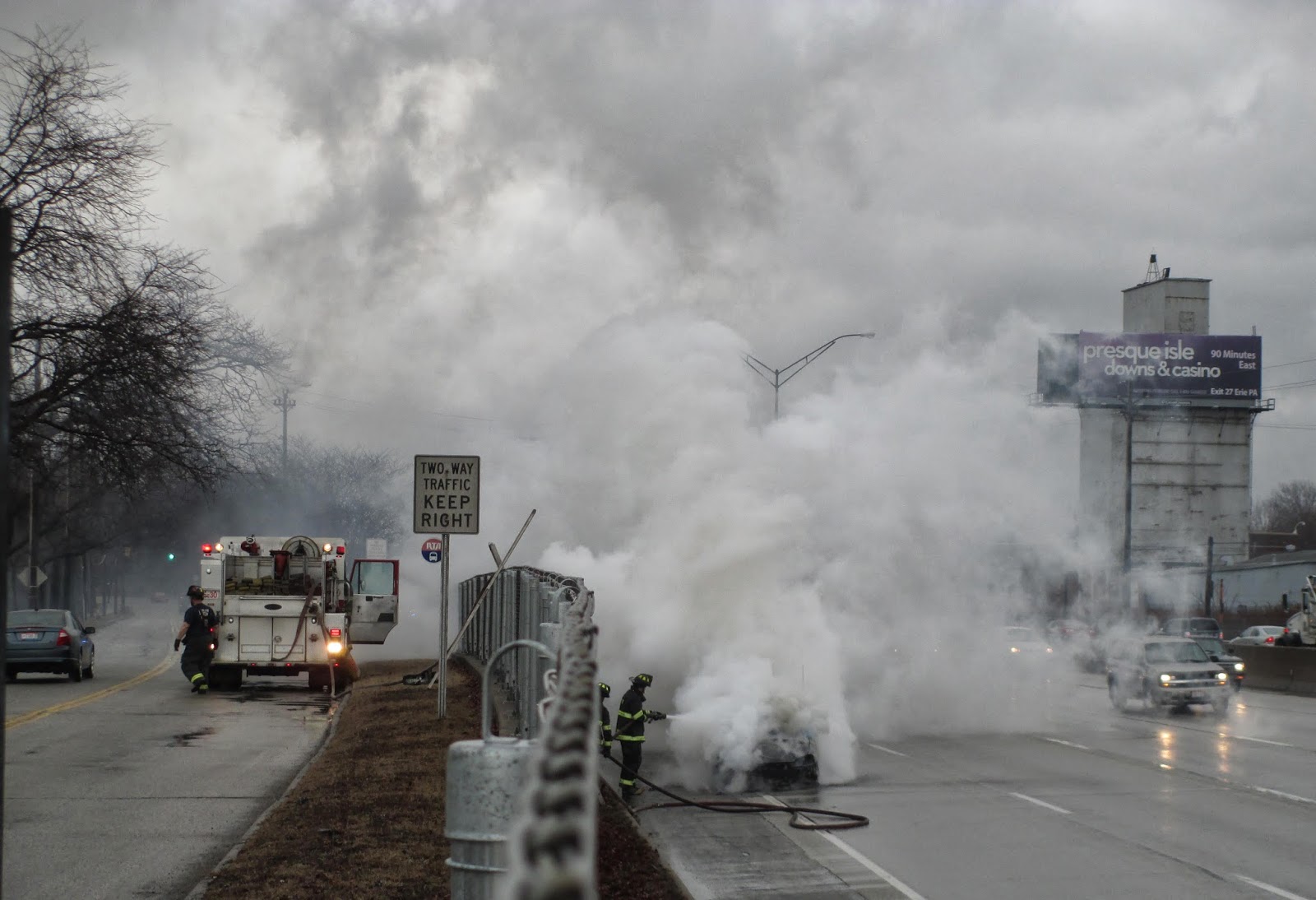 What timing!  I always carry a camera, ya just never know what you may see.  I was leaving a job on the marginal about a 1/4 mile from the MLK exit of Rt. 2 when I came upon this fiery mess.  Poor guy.

It was in this exact spot that I came across another car fire years back that I wrote about.  I tried finding it in my Yahoo archive so I could include it with this but couldn't locate it.  If I do, will repost it to compare notes.  In that fire I think it was a Blazer, no joke.

19 Action news were interested in my photos but by the time the 10 pm news was aired breaking stories of the missing airplane came in.

No one was hurt here but it did create a spectacle and one nasty traffic jam.

Reporting, not quite live, from Cleveland - Carey Masci

Hey Gang
Well I embarked on short 3 day trip with Walt & Jimmy to Dayton for a dance recital and museums. I wasn't feeling the best so wasn't to keen on going but doping myself up with loads of green tea, vitamin C, hot foods and Nyquil had me feeling just a bit short of OK. So I packed and we left Friday at 6pm, and yes I was ready, zero wait time for Walt & Jimmy.
The ride down was uneventful. We stoped somewhere in Ashalnd at a place called Der Dutchman. Corporate Amish food, but it was good.
Our rooms are nice but I had something extra they didn't. Ants. I left the shot glass of Nyquil on the desk where the ants were and now they are gone. Besides the flu bug does it chase away ants also?
2 in a row for Carey! I woke on time for once for breakfast, 9:30. It was amazing seeing I didn't sleep sound.  The room above me either has a dance troupe staying there or someone with elephant feet - BAM BAM BAM.

Then we were off to Wright Patterson Airforce museum at 10. Even if you don't like flying or planes it is a must see. A very impressive display of planes, all the wars since the advent of the plane and other artifacts.

We took a lunch break in the cafe in the museum.  I was telling Walt I haven't been here since about 20 years ago. The next table over an elderly volunteer sat down. I had to ask him how long has he worked here since I was wondering how much it has changed the last time I was here 20 years ago. His name was Bob and he replied 20 years.    Nice!  The answer I got was yes it has changed a lot, much has been added.
Bob served in Vietnam during the French Indochina friction and was trying to stop Vietnam from happening.
Before I got started on a long conversation Walt cut it short and said lets go. I thanked Bob for his service and left.
On to Yellow springs and Clifton Gorge. I have been there twice before but I had to show Walt & Jimmy. They were impressed.

I will leave this part out, buy my book to find out.

From our short hike onto to dinner at the Clifton Mill.  I wasn't hungry so skipped the meal but enjoyed just sitting relaxing.  Then to the opera house.  Our waitress told us they play nothing but old people music.  Who cares.  I wasn't sure if we would even stay I wanted to look inside the opera house because each time I was in the village it was closed.  Luck had it where it was open.

Stay tuned for whats inside the opera house.

How is everyone in the midst of yet another Arctic blast?


Hey Gang,
Well how is everyone in the midst of yet another Arctic blast?  I was at Walt’s house this eve watching vacation videos of years past when it blew in.  Watching videos is something we’ve wanted to do for some time.  When I brought the DVDs over a while back they wouldn’t play.  After some head scratching I learned that when you make a DVD you have to finalize it before it would play.  Heck no one told me.

So there we were at Walt’s laughing at how goofy we were and how little his kids were when – BLACK.  The lights went out.  After some scrambling in the dark to find flashlights I immediately called the folks to make sure they were OK and if they had Dad’s backup oxygen tanks filled.  Mom informed that the lights in Wickliffe were flickering and my sister in Painesville called and said they were in the dark.  From where I was at in Mentor to where my sister in Painesville lives is at least 8 miles so it’s a wide swath.

I was worried that I may not make it home because I drove over to Walt’s driving on E.  I thought what if the gas stations are also without power?  So Walt lent me his gas can and poured some in, enough to get home.  After juicing up we said our goodbyes to Walt’s family and told them if you need lights you can join me in my car or come to Wickliffe.

It was eerily strange to be driving in the suburbs with heavy snow falling and no lights almost like being out in the country.  We hit the main drag and it was crazy, Philippine traffic on ice.  The roads were filled because all the bars and restaurants closed, rush hour traffic at 11pm.

I was upset at the stupid drivers because everyone should know that when power is out you treat traffic lights as four way stops.  Just as I was mumbling and complaining I drove through a traffic light.  My window was iced, the darkness and the heavy snow was a challenge, still no excuse for not seeing it.

I got to the western end of Mentor and the lights were all on.  I spotted a gas station and stopped to fill up.  As I’m pumping taking it all in, the snow, the traffic the darkness, I looked across the street and next to Best Gyro’s and the beverage shop I saw something that brightened up everything.  Usually I have a camera with me but not this time.  It is something everyone needed to see.  I am not sure if it was part of the gyro shop or the bev store, I doubt it though as why would they have it displayed?  But could it have been part of a display or was it a reflection?  So what did I see?  An illuminated cross.

In the midst of the darkness I saw an illuminated cross that said to me – peace, there still is light.
Posted by Carey K. Masci at 10:23 PM No comments: