Hey Gang,
The 10 year website as I like to call www.gogobus.cc has a couple of more links done. Why do I call it the 10 year website? Well it seems thats how long it will take to complete it. You know what? I think it has been 10 years, hmmm maybe 8.
So many people have come and gone through my revolving door. So much time has passed and here we are still working on it. What I thought at one time may actually turn into something is now more or less a hobby. People look at it, but not many use the message board as I hoped would. I always hoped it would turn into something where all of you and my many connections would post events from where ever you live. Oh well.
The links completed are the diners and Jeff is busy putting back up the postcards link that will show the many cards I received from you. Also Jeff put the rest of the Cookout/Freezefest photos on.
I am sure you can figure it out but let me help you navigate to these different links.
First lets take a look at the cookout photos. Go to www.gogobus.cc - click on EVENTS SHOWS PLACES TO GO - click on EVENTS - click on FEBRUARY

When you are done click on the EVENTS, we are now going to take a look at the Diners & Restaurants, I don't have all the states filled in, just the ones I have travel to or through and ate at. Click on PLACES - will use Ohio as a demonstration, click on it - click on Diners & Restaurants.

When finished there click on the little green house that takes you back home and lets head to the POSTCARDS.
Click on DAD AND FRIENDS ADD PHOTOS AND LINKS - click on Postcards. Jeff only has a few up, in time we will have all the postcards received from you.
Thats at for this tutorial. Give me feed back on how you think the 10 year website is doing and as I have only said only a million times know of something happening where you live or have a website post it and link it.
Gotta GoGo!!
Carey
Posted by Carey K. Masci at 12:58 PM No comments: 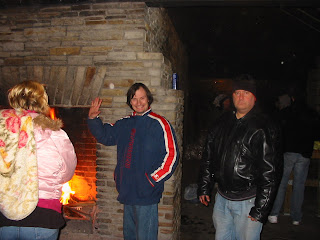 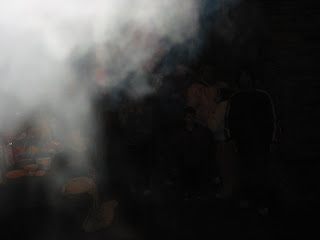 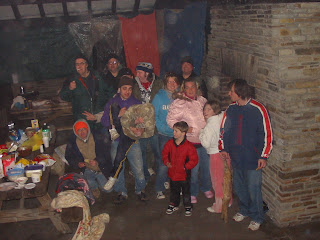 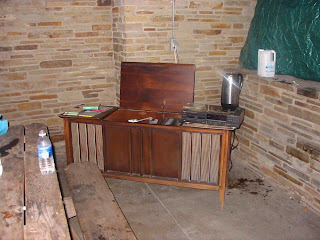 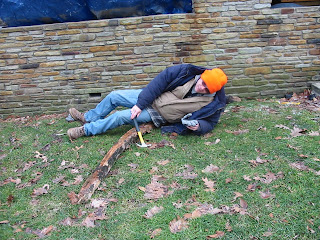 Hey Gang,
Another year, another Winter Cookout/Freezefest, and another night of chaos, well sort of. I wanted this years event to be well planned, things set up early, more food, I just wanted it nice. But, of course it didn't work out that way. BUT - there was a divine intervention that without it we would of been left out in the cold, literally.
The delay in planning it was because of the ridiculous law against bringing in and gathering firewood. By the time Rich had come up with a plan to buy Dura Flame logs I only had 5 days left to tell everyone that its back on and get everything.
Saturday afternoon Rich drove to the park after church and left a report on my answering machine. Hey it looks like we are going to have some company, Friends Church is have a party there. They said we could join them though.
I panicked a little, OK a lot. If everyone showed up and with the kids running around and our brand of humor, I just didn't see how this was going to work out. So Jeff and I scooted over there about 3. Sure enough there was this man sitting in a lawn chair close to the fire on sentry duty, at least thats how he acted, remember the Alamos, hold the fort at all costs.
I approached him and said my name is Carey. He replied oh you're Carey so am I Cary. According to Rich we could join them, according to this guy, this is our space - GO - use the outside tables. I tried explaining to him that I have been doing this on the same date for years, we are going to have to share as there is no way to get a hold of everyone I invited. NO, use outside. Back and forth. A lady shows up, this is weird, her name was Cindy, my sisters name. So there I was going back and forth with Cary and Cindy. I was saying to myself boy is that Cary feisty and mean. He had to be saying boy is that Carey feisty and mean.
Jeff and I grabbed the other table and started to unload tarps etc... Cary said sarcastically what are you planning to do spend the night, I looked at him and said yep. Their group started arriving. The Pastor came over towards us and calmed the waters. He said sure use the other table we will be out of here by 7. I took one look at them and whispered to Jeff... look at them shivering, they won't last, we have nothing to worry about. I left Jeff behind while I ran home to grab a few more items including Jeff's Spaghetti and potato salad. About 30 minutes later Jeff calls my cell, well they left we have the place to ourselves. So the miracle was they had wood delivered and hardly used any of it. I worried all week what to do about firewood for nothing. How about that!
It was a decent turnout. Mark & Becky and their kids, Walt & Jamie and their kids, Jeff B., Jeff M., Jamie, (hmmm 2 Jamie's, 2 Jeff's and 2 Cary's OK not the exact spelling but still), Joe, Rich & Suzanne, Brian, Bruce and Keith. It was a little disorganized, the grill was almost impossible to light and Jeff some how removed the glass knob for my percolator and made the coffee go all over my cd and stereo. Stereo? Oh yeah, driving around the week before looking for wood I saw an old stereo console on a tree-lawn so loaded into my van and brought it. I was hoping to spin records but didn't have time to fix the player so hooked up a cd player to it. Hated to mix old with the new but it worked. I offered it to the Pastor but he said uhhh thats OK I have a MP player. I can't win. I just started switching to CD's and now they are becoming obsolete. OH BOY!
Enjoy the photos. The one with Jeff on the ground is after he fell off the wall while hanging the tarp. I yelled Jeff please don't move, just lay there, let me get my camera. He's OK just a little sore. The one with the smoke you can hardly see anything is Marks breath while trying to snap a photo of the gang, temp outside was a chilly 18, insides a balmy 140 of course directly in front of the fire. Maybe next year you can join us..

Gotta GoGo!
Carey
we will be posting more soon on the website
Posted by Carey K. Masci at 2:28 AM No comments: