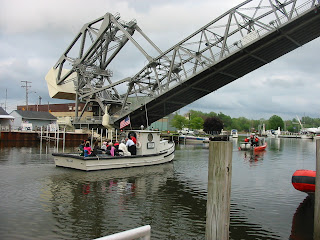 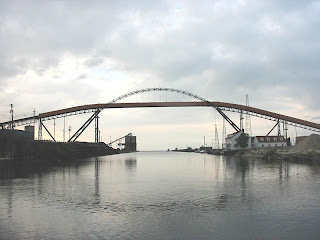 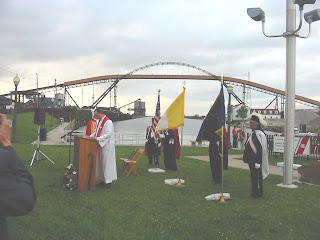 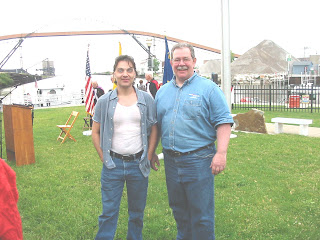 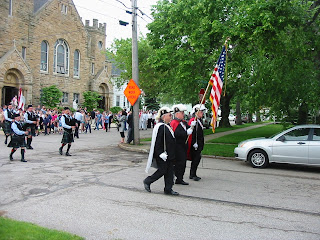 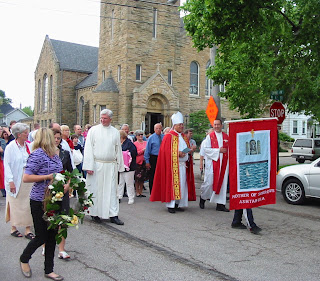 Hey Gang,
Joe said his Cutco office was in the harbor area of Ashtabula. I found it with ease. I briefly was in that area years ago I think for pizza so I sort of knew the general direction. Ashtabula is another area hit hard with unemployment. But I'm hearing more and more people saying that want to move there to flee Cuyahoga County and are worried Lake is going the same way. So I commend Joe for taking the risk. He may be in a hot spot for growth and could see his business boom.

Joe was busy interviewing job applicants so I unloaded his shelf and took a walk through the woods behind his store. Finished exploring I told Joe I'd be right back, going for a drive to see whats in the area.
I don't know the roads or streets so can't tell you where I was at. I took a right at an intersection. The side street before it there was a church with police cars and a crowd of people in front. I spun around towards the church to investigate. It looked like maybe a wedding or a graduation but the cop cars?

At the stop sign in front of the church I asked a lady what was going on? She said they are going to bless the ships. What? I had to park and find out. I parked on a side street and asked another lady? Whats going on? Its the blessing of the ships. OK one more time, I'll ask this man. Excuse me whats going on? Its the blessing of the fleet, we are marching down to the harbor with the priest and bishop to pray for the ships safety, the father sprinkles water over them. Is this something new? Nope its the 61st. I guess I missed a few - huh?

I can't believe I also forgot his name, usually I remember everything so we'll just call him Mr. Cordial. Mr. Cordial said they were about set to march and I could join in. I ran to my van and grabbed my camera just in time. What timing and little did I know I parked on the parade route.

First came the Knights of Columbus 4th Degree Honor Guard, then the bagpipers, followed by Father Ruggieri, Bishop Murray of Youngstown and walking behind was the congregation and friends of Mother of Sorrows Church.

I asked Mr. Cordial if he minded I tagged along side him. He said absolutely not. I had my own personal tour guide. As we were walking he was telling me the history. At one time Ashtabula Harbor was the third largest in the country behind New York City and Long Beach in California. Ashtabula was a prime fishing area. There were many fisheries and charter services, private and commercial. Charter's still exist today but nothing like its heyday before the fish were just about over fished to extinction.

The road we were marching on was very tough in the early days. It was known for its many bordellos to serve the sailors. Rough and tumble. Now they are trying to lure back businesses. There are quite a few nice eateries and bars on the strip heading towards the harbor.

The march was maybe a mile and a half long and ended at the Public Dock by the Lift Bridge. The Knights of Columbus walked to the dock, the bag pipers stayed put at the entrance of the assembly while the rest walked through.

The proceedings went as follows:
Posting of the Colors by the Knights of Columbus - pledge of allegiance - greeting and then the prayer service.
The first reading was Genesis 1:19, then Matthew 8:23-27. The prayers were The Lords Prayer - The Shipmasters Prayer - The Sailors Prayer - and Prayer of Blessing of the Boats.
It was followed by The Memorial Prayer, the casting of the wreath on the water, Taps, final blessing and a closing song by the Mother of Sorrows Mens Choir.
And the conclusion was Father Ruggieri and Bishop Murray boarding a boat and traveling the harbor and river to bless all the boats.

I may not agree with everything in the Catholic faith but they do have very respectful and beautiful services. I felt blessed to be invited to their worship.

I snapped a few photos and headed back to Joe's.
Posted by Carey K. Masci at 1:09 AM No comments:

This one's for Gwen 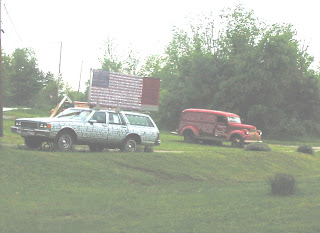 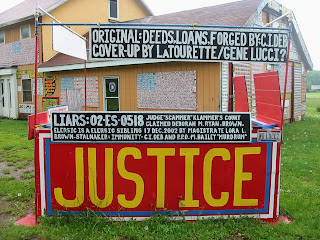 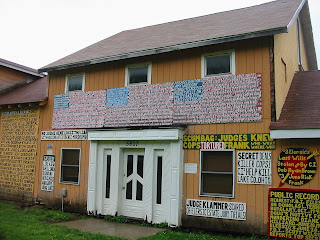 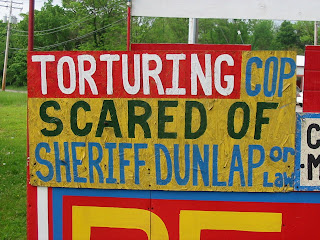 Hey Gang,
Gwen made a request, well sort of a request, that she wishes I would write fun stories as I use to. Well this is the best I can do until our economy rebounds or gas gets to a reasonable level so I can hit the road and meet wonderful and interesting people or cats again.
So many things I do I just stumble on, no planning just walk right into them. It all comes down to timing and instinct which you can't explain. Thats how my Saturday went. I haven't had a day like this in some time.

My good friend Joe opened a business in Ashtabula selling Cutco knives. Ashtabula is about 45 miles from my house in Wickliffe. Joe bought a cabinet in the Cleveland area and asked if I could do him a favor and deliver it. Of course I said yes. I wanted to check out his new office anyway and it would give me the opportunity to take a short road trip.

The only plans Joe and I made was the time, I had to be at his office before 9pm. Since the weather was on and off rain and nothing else going on I decided to leave early and take my time getting there.

The quickest way to Ashtabula is taking the freeway Rt. 90 and exiting at Rt.45 but I prefer Rt. 20. Rt. 20 is the old route that everyone drove before the advent of the freeway, it will take you all the way to the east coast.

I took the freeway Rt 2 until it ends and dumps into Rt. 20 in Painesville Twp.. From Painesville Twp. you drive through Perry, Madison, Geneva, Saybrook and then enter Ashtabula. In Madison there were detour signs saying road closed 6 miles ahead. I trusted my instincts instead of following the detour, which sometimes can take you on a wild goose chase, and continued on. Before hitting the road block in Geneva I took a right on Walter Main Rd.. There is a junk yard I go to on Walter Main but I never drove the road past that point. I played my hunches and I was correct. It connected with Rt. 84 and from there I could loop back over to Rt. 20.. Follow this? You may want to travel it someday.

NOW I wrote all that just to tell you what I stumbled upon. If not for that detour I would of missed one of the most interesting in your face houses I have ever seen. I flew passed it and had to turn around. I parked on the berm to snap photos of it and the owner came out.

Believe it or not I can't remember his name. To tell you the truth, I can't even repeat much of what he said. Normally I can write in verbatim what someone says. But this guy talked so fast, had so much to say I couldn't keep up. I can sort of sum up what he said this way "Vote them all out"! Oh one more thing I remember, he said people should be worried if they shut me up because then its over.

I would almost have to call his house folk art-ish meets 60's protest - how about folk-adelic? The same with his cars, yes written all over. He said to get his message out he frequently parks his cars in no parking zones. Its worth the fine because usually these are the best spots to advertise your message.

Before I left I invited myself back for coffee and he said sure, anytime. So when I return will report back to you with the full scoop. He did say go ahead post this all over the internet what these crooks are doing. So I am obeying orders. I just wish he lived in Euclid.

From there I headed back to Rt 20 to get to Joe's but my day wasn't over yet.
Stay tuned.

Cleveland... the land of wait till next year.

When Ben Roethlisberger got in trouble for sexual misconduct he was facing a sentence of a six game suspension or possibly being traded to the Cleveland Browns. Ben quickly said I'll take the six week sentence going to Cleveland is a life sentence.

The Cleveland Indians are so bad that they have decided to no longer start each game with the National Anthem, instead Taps will be played.

What does Obama's economy and LeBron James have in common? They both tanked.

LeBron keeps saying not to worry. Someone has to tell him he should worry he's not in New York yet.

If LeBron does leave Cleveland it would be bad and good. Bad because Quicken Loans arena will be empty of any basketball fans. Good because Cleveland needs a large homeless shelter.

The Cleveland Indians could use LeBron. At least LeBron can throw a game.

Serious though, the Cleveland Indians base runners are watching the Cavaliers closely. They are learning the proper way to slide.

And thats the way the ball bounces, at least in Cleveland. But wait till next year!
Carey Masci
Posted by Carey K. Masci at 3:17 AM No comments: