Flashback to 2006 Madison, Wisconsin - my account of seeing the capitol

Hey Gang,
Since Madison, Wisconsin has been dominating the news I thought I would dig up an old story and resend it about when Dov, Rich and I were in Madison Wisconsin.

Its a shame from what I heard the Union Thugs and Mob have done to the place. I wonder if its part of the Unions new contract that they have to clean up the place on their time. Now I am really dreaming, it will be us the tax payers paying for it.
Well enjoy this flashback from 206.

~~~~~~~~~~~~~~~
Hey Gang,
Its Labor Day weekend, about 2 weeks since the Wisconsin trip and here I am still writing about it. In the last segment I ended it with ...the Man at the bottom of the 14 steps. That man is OJ, his job - greeting people about to walk the last 14 steps to the observation deck and answering questions they may have about the Capitol building of Madison, Wisconsin or anything else you care to ask.

We found out about Madison from Casha the Polish girl who's here on a work visa. None of the locals told us about it. She said you have to go there, its such a beautiful city and surrounded by lakes, the two that surround the downtown area are lake Mendota and Monona. Taking the main road in to downtown you can see a magnificent structure in the distance and as you get closer it gets more impressive.

We parked our car at a meter and after a short walk Dov and Rich headed back to the car bypassing the Capitol building. Not me I had to investigate it and boy am I glad I did. All it took was one quick glance through the massive doors and I was completely wowed. I yelled at Dov & Rich to come on the doors are open but only Rich came. It was kind of funny watching Rich run in, maybe he was concerned with the meter, not sure. Have you ever seen one of those mazes where they let a mouse in, it scurries all over, finds the cheese and heads out another opening? Well that's what Rich looked like.

We walked in together, I went to the right and he went to the left and in a hurry. I stopped and watched him thinking we should be enjoying this together but maybe he knows another way to the top floors. Well I got to the second level and still no Rich. So I said to myself forget him and continued on alone looking in doors and walking every floor. The Supreme Court room was something to behold. It made you feel like you entered something sacred.

You just have to see this building, the large badgers above the arches, the marble floors, even the door knobs were engraved. The dome is the 4th largest in the WORLD! The statue adorning the top of the dome is called Wisconsin and the figures for her are equally as impressive. The gilded bronze statue is 15 feet tall and weighs over 3 tons!

OJ filled me on all this and more. He is an avid collector of old gas station memorabilia and has traveled the fabled route 66 and other routes in search of merchandise, photos and information about them. An upcoming show on PBS wants to interview him and show some of his collection. I didn't take a photo of OJ but he promises me that he will send one of himself and a few of his collection to be placed on www.gogobus.cc. Right OJ, I'm still waiting.

After about a 20 minute or more talk I left to find Rich and Dov. They both jumped at me. I said hey I met this fascinating guy and did you see the Supreme Court Room, the Observation Deck? Rich replied no I went in saw what I wanted to, took a few pictures and left - and what did I tell you Dov why Carey was taking so long, he met someone.

But of course did they expect me not to! 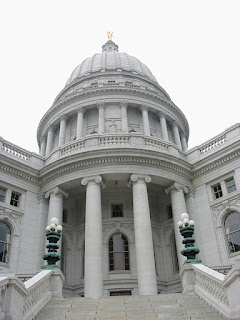 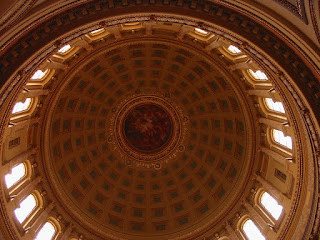 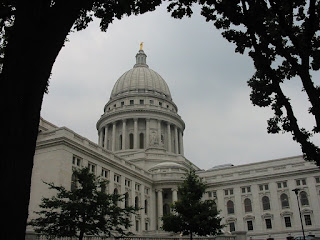