Be Careful with your credit cards

Be Careful with your credit cards.

I received in the mail the new terms for my credit card. It says effective June 25 the penalty for being late could raise my interest to 29.99%.

How long would this rate last? Indefinitely!

bus has rot and rally and my foot

Hey Gang,
With all the changes going on in our crazy country and world there is still one thing that makes people smile. The GoGo Bus. OK OK maybe it's a bit of a conceited and an over the top statement but heck it sure seems that way.

The poor GoGo Bus is now in surgery to repair some dreaded rot. It was such a hard decision to whether I should repair it, just drive it as is and let time take 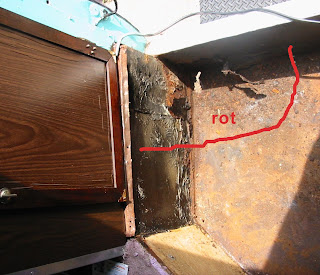 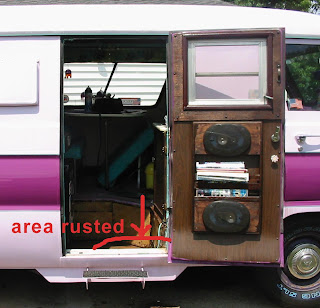 its toll or try selling the ole girl. Lets face it, the days of reasonably priced let alone cheap gas days are over. At these prices and the rate of the hyper inflation for everything else it was a tough financial decision to make. But after I got the Bus started and drove it around and the thumbs up and shouts of what is that thing - WOW, I decided to whip it into shape one more time.

I was just at the top of my street getting gas when a man came over and said when you are done can you pull over to the bar parking lot, me and my friend never saw one of these and want to take a look. I said sure. I finished pumping and drove across the street. Waiting for me were three people. They were Maureen and Mike. I asked who is the other gentleman? OH I am not with them, I am the beer distributor but had to take a look. And so it goes.... After owning the GoGo Bus since 1997 it never gets old when people see it for the first time. It makes me feel good and its always an opportunity to make new friends. As I say I am never alone when I drive the Bus.

I am excited for the week of august third to attend a vintage camp out. I haven't been to one of these since 2001. That rally was for the club Lost Highways. I wrote the club numerous times with no reply, no sure if the owner was still upset at me or if they disbanded. Why would he be upset? I met the owner at the Carlisle Chrysler show in 2001 when I won Best of Show. He invited me to his rally up in St. Ignace, Michigan held at Tiki campground. I drive all that way and he asked for club dues. I said HUH, first rally, you didn't tell me about dues and that's no way to spring it on someone. I think that's why he avoided me after that.

Anyway... it was still a blast at that rally. Most people had their rigs set up for the year their RV was built. They were like traveling museums. Fun time. I just hope my Bus is done in time for the Jimco Rally. Here is the info:


NE Ohio Classic RV Rally aka Jimco Jamboree
August 3 - 9
Thompson,Ohio 44086
Hosts Lydia and Jimco
Free
Many 15 and 30 Amp campsites 6 with water.
Located at my 30 acre tree farm.
Fishing. Swimming.
Pets welcome.
Meet other members.Have some fun!
Saturday night share a dish buffet dinner and large bonfire.
Wow! A chance to enjoy a wonderful vintage rally on our member, Jimcos family farm. Does it get any better??!! Gotta go to this one folks!! Pat.


So I have my work cut out for me to get the Bus ready, can I do it? I think so.

One more fun road story for you. Anyone who has driven with me knows that I am a VERY relaxed and good driver. It just comes naturally, set my coffee on a little box between the seats, turn the key, cross my legs and go. And I never use a travel mug, only coffee cups, that's what you use to drink from. Not those plastic mugs with child like sipping covers,YUCK! I also like to drive with my one foot up on the side view mirror. Hey its comfortable.

So there I was on Rt 90 heading home driving with my foot out the window when two giggling laughing ladies pass me. They slow downed when they got close to me and then sped off. I gave them the peace sign. Then they slowed down and I passed them. They caught up to me and did some hand signals and showed me their cam. They wanted to take my picture. I nodded yes go ahead its no big deal. I just thought it was funny. Doesn't everyone drive with one foot out the window in a Chevy Astro? Guess not.


Gotta GoGo!!
Carey
www.gogobus.cc
Posted by Carey K. Masci at 11:00 AM No comments:

Hey Gang,
Just wanted to conclude my Texas trip with some additional thoughts and sum it up.

I was saddened, which I guess I shouldn't be any more but I was, to see the same old same old corporate stores and restaurants we have here in Ohio. Just looking at the freeway exits it could be Anywhere USA.

I haven't seen all of Texas but the areas I have I was just not that impressed with the scenery, flat and for the most part brown.

When we landed it was raining and below norm temps. I thought we never left Cleveland. Its strange because Texas has been and is in a drought but the day we land.....

I did see quite a few monuments with in God we Trust. In fact San Antonio was named after San Antonio de Padua. But according to liberals and atheists this country was founded on separation of church and state. What ever.

San Antonio impressed me. I loved the river walk and all the historic sites. Tacky tourist shops along side of better gift shops. It was confusing though, with all the Mexican made gifts and logos I wasn't sure what country I was in.

San Antonio to me is a hidden gem. Unless I have been out of the loop, I don't remember hearing much talk about it being a travel destination. I want to go back and see the rest of the sites I missed.

The Alamo. Now that was surprising. I always pictured it out in the middle of some barren dessert. All alone. But in fact, its right in the middle of San Antonio. Across from it was a big monument dedicated to those who died defending it. It was closed when we got there but we were able to peer in through the iron gate. Impressive.

I am sorry but this is where my mind and thoughts went while looking and walking around the Alamo. Seeing how things are now in America, with all the lunacy and socialist atheist talk, if I could take a time machine back I would tell those men, save yourself, its not worth it. Get mad if you like but that's where my mind went.

Directly across the Alamo is a monument honoring the dead who tried to defend the fort. Jim Bowie, Davy Crockett were among the names listed. A few teenagers were running up this monument to have their photos taken. Sitting on a bench directly in front of it was an old man. He looked homeless. Of course I had to talk with him. His name was Jonathon. I wish I had more time to sit there and converse with him but my group was heading to the Guinness museum. Jonathon's family has been in America for 300 years. He was so upset and angry that the teens were running all over the monument and disrespecting the men who gave their lives. Jonathon said if they only understood how hallowed this ground is. Here was a man who appeared homeless and what was he complaining? Not his situation but the lack of respect being shown to the hero's of this nation. That's the true American spirit.

In all it was a fun and memorable trip.