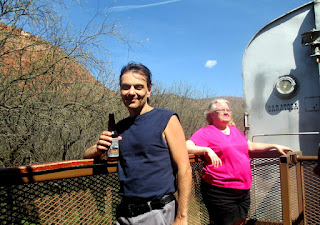 Day 5
Woke early again but this time I had no choice because planned was one big event, the Verde Canyon Railroad. It is in the Sedona/Jerome region which is about 120 miles from Scottsdale. The trip is not that far time wise though because speed limits hit 75 but most including myself drive a bit above like 85 or so. And yes there is also traffic way out in the middle of nowhere.

The route drives through a couple of small towns and like the others in Scottsdale they seem to be dotted with gated and golf communities. Cottonwood was interesting. I like to visit that small town again.

We arrived about 45 minutes before the train departure but Jimmy worried we'd be late so there was no stopping for anything to eat. Inside of the Verde Canyon Depot /gift shop was a snack bar but typical of most the food were limited and overpriced. So leaving Jami and Jimmy behind a mad dash was made to Cottonwood to buy a cheaper burger which in comparison was not that much cheaper but I'm sure the flavor was much better. I zoomed back just in time as they were boarding, talk about fast food.

Inside of the train was impressive. It is a fully restored vintage train. We sat in First Class that was laid out. Each group had their own little section. Ours had two comfy and I mean comfy couches facing each other with a coffee table between. Large windows to look out with air conditioning but not ice cold. Kettle chips were on the table, champagne or hardened cider was served complimentary. All cars accessed the open-air cars equipped with wooden benches and canopies.

After settling into our seats the hostess made the announcement welcome to Verde Canyon Railroad, this is a four hour ride..... we also have a buffet set up for you with subs, chicken wings, olives, tomatoes, cheeses, crackers and small brownies. I killed myself running for a burger and wala they had a buffet. Oh my! Even though I was stuffed I over ate on the chicken wings and olives. 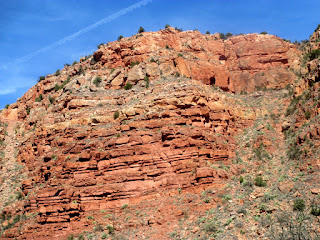 Now about the ride. It was my first experience on a train and it was a great experience, I just loved it. The constant chatter of the rail, the slight sway, the view made it so very relaxing and enjoyable. The train moves at such a leisurely pace that your mind can wander. Mine did and I thought of all the movies that were set in trains, finally I could vision it. No one on board came up murdered and no jewels were stolen but I still imagined it could happen. 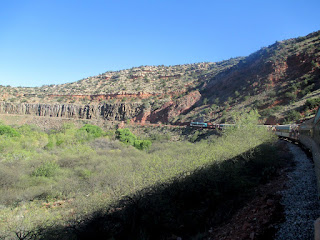 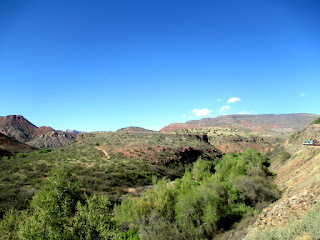 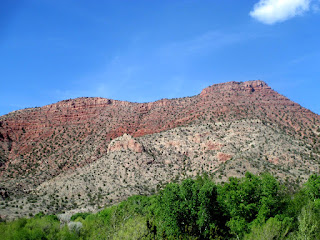 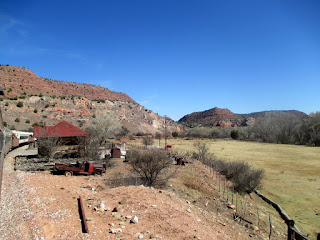 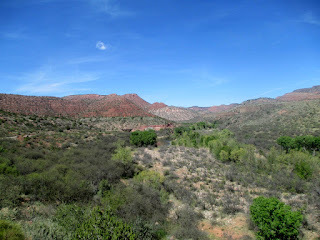 The ride takes four hours and is 20 miles in length. As the journey goes on the scenery gets better and better. Words are hard to describe the beauty. When it first starts you ooh and awe and say looked at that, everyone does it. But after awhile you run out of words and just stare in complete amazement. What beauty, can't say it enough. The beauty is so magnificent we forgot about our comfortable couch and stood at the railing of the open air car. The ride does not feel like four hours because your mind is engulfed by what you are seeing. You don't realize that you stood for almost the entire train ride.
Amazing. 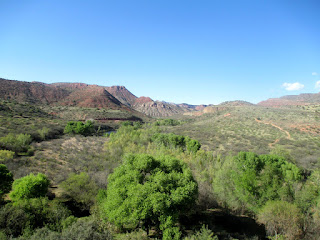 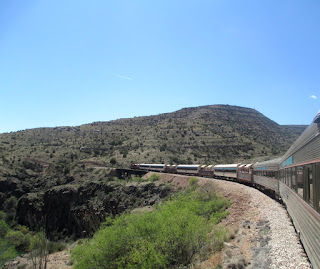 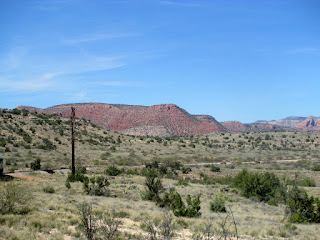 Gotta GoGo!
Carey
Posted by Carey K. Masci at 10:50 AM No comments: